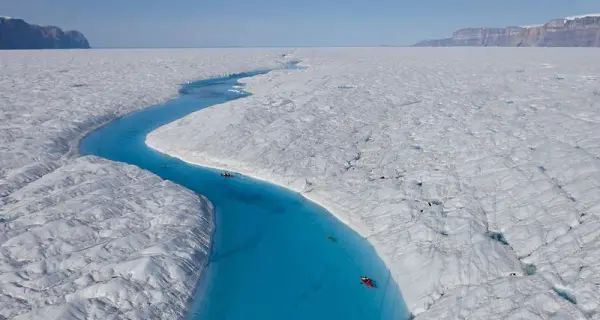 Scientists have found a reservoir hidden from people’s eyes, the existence of which has to be confirmed instrumentally.

In Greenland, there may be more water than previously thought – in addition to the already known glaciers on the surface, scientists have discovered underground lakes and now suspect the existence of a subglacial river.

The study of the SICOPOLIS climate model, which will allow us to understand the mechanisms of the existence of ice sheets in the circumpolar regions of the Earth, scientists have come to the conclusion that potentially a huge river could be hidden under the ice cover in Greenland.

This hypothesis was prompted by specialists to study images of glaciers and their properties in the northwestern part of Greenland, where the Peterman Glacier is located. The data show that there must be a river of melt water beneath its surface. Scientists estimate the length of the river to be at least a thousand kilometers and suggest that the waters of this river should flow into the Arctic Ocean near the Peterman fjord.

Since the Japanese specialists, who put forward this hypothesis and described it in the scientific journal Cryosphere, do not currently have detailed satellite and radar images of the potential river area, they cannot confirm the truth of their statements. It is expected that a detailed study of the Greenland ice sheet in the specified area will provide more accurate information about the potential river.

We will remind, earlier there was information that traces of a giant ancient lake were found under Greenland. It is located deep under the ice sheet in the northwest of the island. Scientists estimate that the lake may be hundreds of thousands of years old, if not millions. This is the first time an ancient lake bed has been discovered in this part of the world. Last year, more than 50 subglacial lakes were discovered under the Greenland ice sheet, that is, accumulations of liquid water under the ice sheet. Beneath the ice is an ancient lake basin that has been dry for a long time. When the lake formed, the region was ice-free and the basin, with a surface area of ​​approximately 7,100 square kilometers, was full of water.