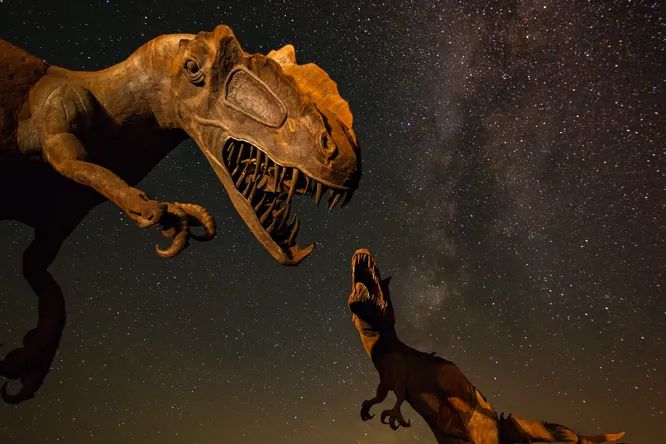 It seems that man is not the first creature from Earth to visit the Moon! Some experts believe that the first could have been … dinosaurs.

The extinction of dinosaurs still causes a lot of controversy and questions in the scientific world. And some theories regarding this event seem completely insane!

This is the hypothesis put forward by the science writer Peter Brannen in his book The End of the World: Volcanic Apocalypses, Deadly Oceans, and Our Quest for Understanding the Earth’s Past Mass Extinctions. His theory was drawn to the attention of Twitter blogger Matt Austin, who recently posted a fragment of the publication on his account.

The published excerpt describes the impact from an asteroid that created a “hole in the atmosphere.” This caused debris from Earth to fly into orbit, and the “dinosaur pieces” may have mixed with the rest of the debris thrown into space, which then settled on the Moon.

In Brannen’s book, his theory is supported by geophysicist Mario Rebolledo. However, so far, science has not been able to confirm this hypothesis.

At the moment, scientists know that the asteroid that destroyed the dinosaurs left a crater 193 kilometers wide in the disaster zone, evaporating the rock and throwing billions of tons of sulfur and carbon dioxide into the sky. All life within a radius of hundreds of kilometers from the collision site burned down in a matter of minutes. Meanwhile, a cloud of dust from the impact blocked the sun’s rays, likely triggering a “nuclear winter” with falling temperatures and acid rain. Under these conditions, 75% of living species were destroyed.