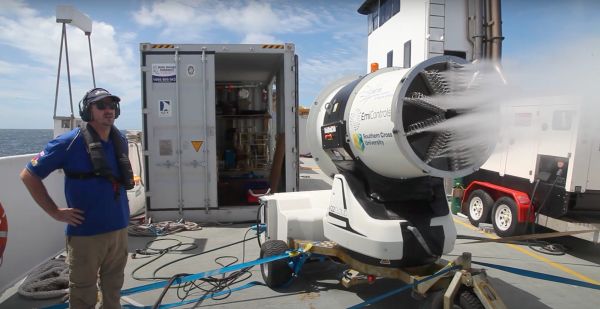 Scientists at the University of Southern Cross for the first time in the world have tested a new technology that will save the Great Barrier Reef from discoloration – the clarification of sea clouds. The researchers showed the work of this method on the university’s YouTube channel.

Special equipment collects sea water and then sprays it through a large turbine in the form of small particles. They mix with the boundary layers of the atmosphere, which helps to clear the clouds.

“If we can clear the clouds a little the whole summer, we will cool the water [in the ocean] to a level that will stop coral bleaching,” says Dr. Daniel Harrison of the University of Southern Cross. The results of the new technology are monitored using drones, which will allow scientists to take air samples.

Now on the Great Barrier Reef, the third massive coral bleaching in the last five years is taking place. Scientists recorded this process in late March. Warming of the ocean leads to whitening of corals, especially if this happens in February. In some parts of the largest reef system in the world, serious damage was recorded. In 2016 and 2017, 2/3 of the reef suffered from a similar cataclysm and have not managed to recover since.