This summer, something strange happens in the mesosphere 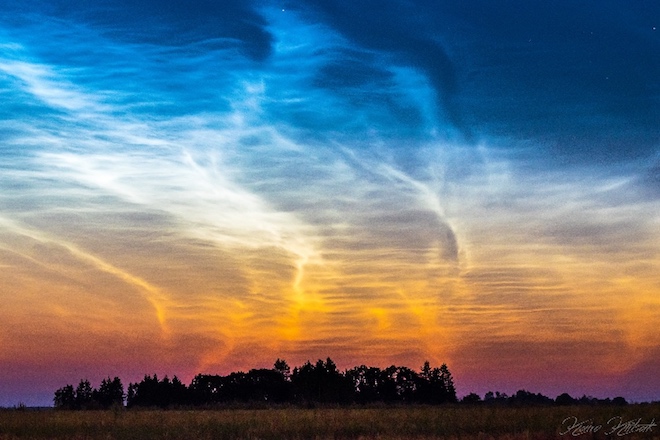 This summer something strange happens in the mesosphere. The mesosphere is a layer of the atmosphere, which is so high that it almost touches the cosmos. In the rarefied air at an altitude of 83 km above the Earth’s surface, shreds of water vapor wind around the spots of meteor smoke. The resulting swarms of ice crystals form silvery clouds that glow in the night sky at high latitudes.

And, no, this is not the strangest thing.

Observers of the sky in the north are used to seeing these clouds in recent years. They are formed in May, intensified in June and, eventually, fade in July and August. This year, however, something else has happened. Instead of dissipating at the end of July, the clouds exploded with an extraordinary glow. Cairo Kiitsak observed this outbreak on July 26 in Simuna in Estonia:

“This is a psychedelic spectacle,” says Kiittsak. – The clouds were visible most of the night, covering the sky for at least 3 hours. ”

Other observers saw a similar spectacle in July, and then, in August, these clouds survived. In the first half of August 2018, the number of reports of noctilucent clouds tripled in comparison with the same period in 2017. The clouds refuse to leave.

Researchers from the University of Colorado found out why. “There was an unexpected burst of water vapor in the atmosphere,” says Lynn Harvey of the Colorado Atmospheric Physics Laboratory. At the end of July and August 2018, the mesosphere was the wettest for the last 11 years. 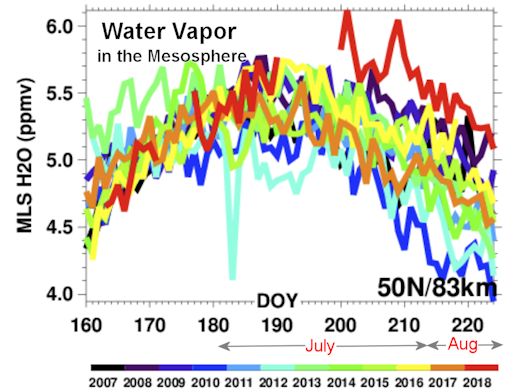 In addition to the fact that the mesosphere was very wet, it was still a little colder than usual. The combination of moisture and cold created favorable conditions for icy silvery clouds.

Harvey and her colleagues are trying to understand how the excess water got there. One version suggests the activity of a planetary wave in the Southern Hemisphere, which can increase the amount of water vapor thousands of kilometers in the north. The phenomenon can also be related to the solar minimum, which is happening now. It is noteworthy that the coldest and wet years in the mesosphere until 2018 were 200-2009. – the previous minimum of the 11-year solar cycle.