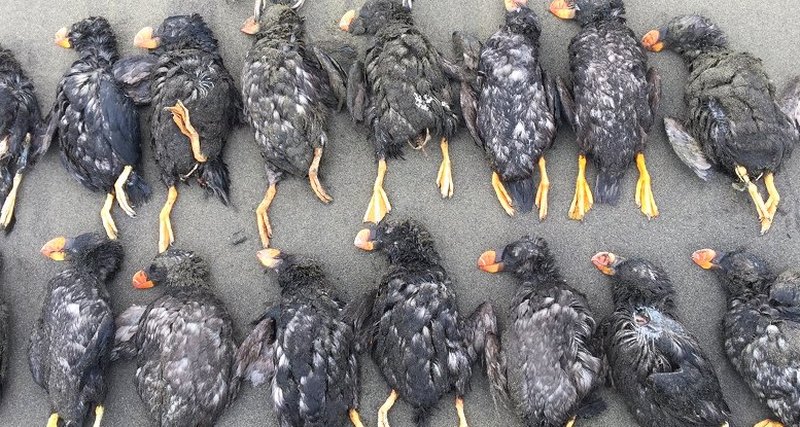 Residents of coastal areas regularly discover tens and hundreds of dead ends, which the sea nails to the shore. The study showed that in fact the birds are dying by the thousands – and in the future everything will only get worse.

Residents of St. Paul’s Island off the coast of Alaska are accustomed to the fact that the seabirds are sometimes washed ashore. But until recently, dead crested dead ends were rare finds, especially in the winter months. Suddenly something changed. By the end of January 2017, the number of sodden corpses had grown to several hundred, which seriously affected the food chain of all animals living near the Bering Sea.

American researchers conducted their own investigation and found that these hundreds of birds were only the tip of the iceberg, and approximately 8,800 birds died on the sea itself. Every month, volunteers inspect the coastal line in search of garbage and remains of birds, thereby collecting important information about the ecological state of the region.

To establish the cause of the mass extinction of birds was not difficult. An autopsy of several bodies confirmed that they were exhausted, with a heavy loss of muscle mass of the wings – apparently, the birds simply died from exhaustion. Many events such as these in the past have been associated with changes in the number of zooplankton. Yes, it is again about global warming – these changes are provoked by heating of some areas of the ocean. Plankton left, the birds were left without the main source of food – and began to die one after another. In addition, the storms raging in winter could be the last straw for the population of birds.