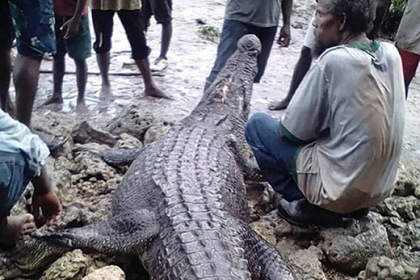 On the island of Kolombangar (Solomon Islands) they caught and killed a three-meter ridged crocodile, which was eaten by a local resident. Reports the edition about it Solomon Star.

In early June, a special police unit was sent to the village of Kaza, where the deceased lived. His staff managed to kill two crocodiles, but both were not involved in the attack on the man.

The villagers killed the third crocodile with knives and spears when he fell into the trap. A human hand and the remains of a recently lost dog were found in his belly.

Earlier in June, it was reported that in the evening of June 2, a resident of Kaza went to dive and never returned. Search for his relatives and neighbors. A few hours later they noticed a large crocodile, which was dragging the corpse of a man in its mouth.

The saltwater crocodile is considered one of the largest predators on the planet. Males of this species reach seven meters in length and can weigh up to two tons. They are found on the eastern shores of India, in many countries of Southeast Asia, in Papua New Guinea, and in northern Australia.

Kolombangara Island is located in the Pacific Ocean east of Papua New Guinea. It has the shape of a circle with a diameter of about 15 kilometers. The population of Colombangary is about six thousand people.