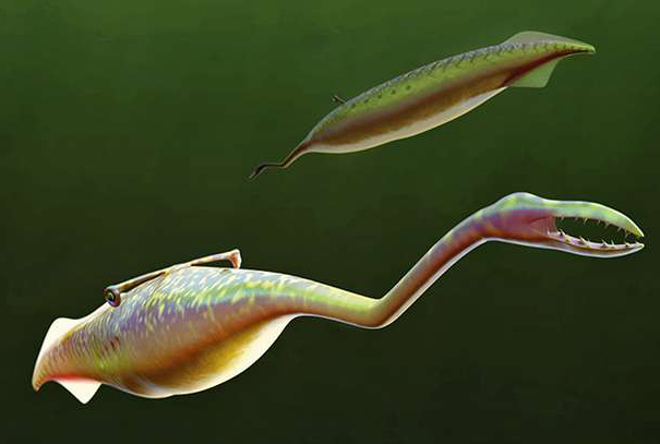 The science does not stand still and every year scientists open all new animal species and the plants which are living now and the died-out tens and hundreds millions years ago. What most unusual animal species were open in 2016?

In 1958 in Illinois the fossil of an animal so unusual was found out that researchers called his “monster Tully” in honor of the amateur paleontologist Francis Tully who found it. In the next decades scientists argued whether was Tullimonstrum a worm or a slug. After studying of 1200 remains of Tullimonstrum gregarium they found out that it falls into with beschelyustny – it is archaic group of chordates cranial which almost completely died out, except for 39 types of lampreys and 76 types миксин. Tullimonstrum lived on Earth 307 million years ago, its length made 0,3 m, and also he possessed larger eyes and sharp teeth that indicates that it was rather terrible predator.

2. The relative of a tyrannosaur of the size of a horse

In 2016 paleontologists declared that the close relative of a tirannozvr (Tyrannosaurus rex) though was not as larger as all the recognized “tsar of dinosaurs”, but possessed surprisingly developed brain for the small size. Researchers studied the skull of a dinosaur an age of 90 million years found in Uzbekistan.

The analysis of a skull of Timurlengia euotica showed existence of the composite device of an inner ear, having defined that hearing of a dinosaur was very sharp, capable to distinguish low-frequency sounds of herbivorous. The research assumes that tyrannosaurs became cleverer still before their size increased — both of these characteristics helped them to get advantage before other predators. 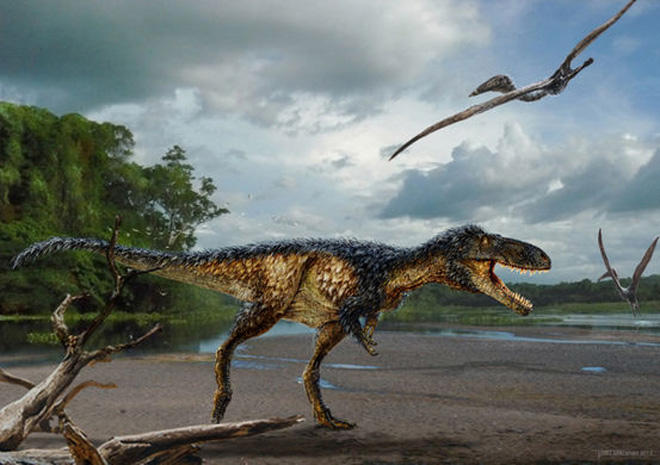 There passed years, but scientists, at last, understood that a whale who was occasionally seen by fishermen, not the young representative of a look northern плавун (клюворыл Byrd, Berardius bairdii), but a brand new look. Its size helped to understand it — the imperceptible whale lives in a northern part of the Pacific Ocean, its length makes 7 m that much less, than at a northern plavun (12 m). Moreover, клюворыл Byrd — gray, and this whale was black, for as got the nickname “karasu” that in Japanese means “crows”. The genetic research confirmed that to a karas — earlier unknown look. However it is bound to Byrd’s whale in the sense that they have the common ancestor. 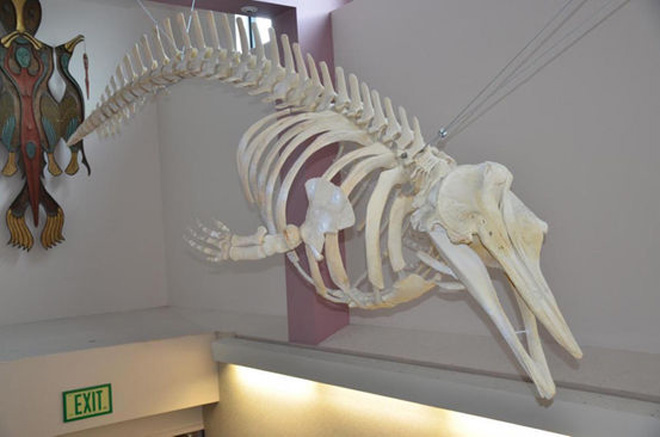 The new species of a frog opened this year is similar to a cricket — amphibious so a little that it can easily be located on a thumb nail. It is possible therefore scientists found this frog living on southwest plains of India, just now. Scientists called it Microhyla laterite, this frog lives on the stony area which the authorities call “heathland”. Despite the name, these heathlands are incredibly rich with the biodiversity, researchers note. 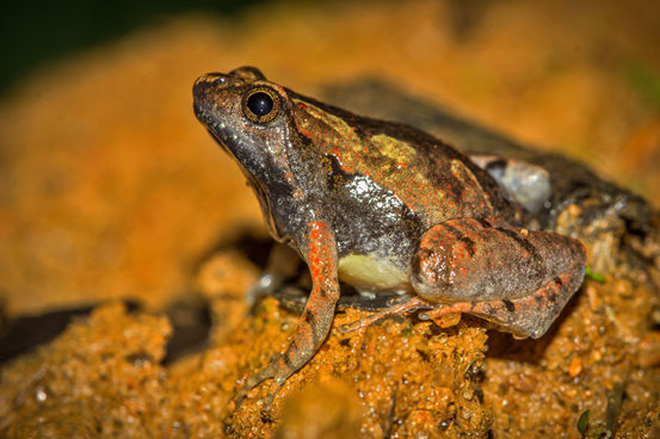 These tiny spiders — the real celebrities in the world arachnoid. Skeletorus and the red-blue “The sparkling muffin” opened in 2015 a black-and-white peacock spider got to fall in love many, generally because of their bright coloring and the complex marriage dances. Last year scientists found in Australia 7 more colourful spiders — thus, all in the sort Maratus of 48 species of peacock spiders. All open types the size do not exceed 5 mm, including Maratus bubo, called so as he reminded scientists a face of an owl (Bubo — the Latin name of a sort eagle owls). 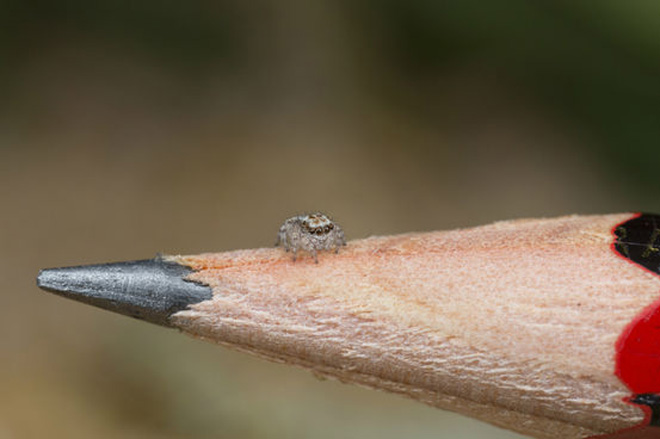 Klingontsa from series “Star Trek” differed in the frowned eyebrows, as induced scientists to give to a new species of a triton with a tuberous forehead such nickname. This triton (Tylototriton anguliceps) is a one of 163 of yet not described types living in Southeast Asia in the area which covers Vietnam, Thailand, Cambodia, Laos and Myanmar. It was described in the report of the World Wide Fund for Nature for 2016. Also such types as an iridescent snake (Parafimbrios lao) and other amphibiouses, reptiles, plants and mammals occur in the report. Researchers urged politicians to protect these animals as many of open types live in the habitat to which human activity threatens. 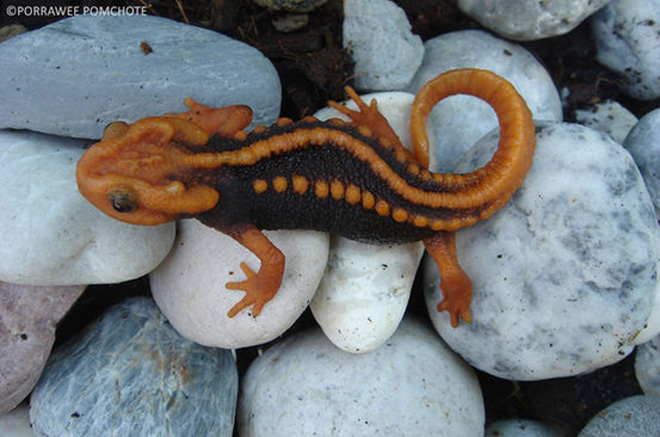 7. A dinosaur from dirt

Ptitsepodobny dinosaur with feathers, lean legs and a bone crest the sad end waited for about 66 million years ago when it got stuck in dirt. Scientists note that position of an animal (the head is raised, the neck was curved, raskinuta hands in the parties) says that he tried to be released that suggested scientists an idea that it got stuck in dirt. Though the newfound species of a dinosaur (Tongtianlong limosus) had feathers, it could not fly. However its anatomy indicates other abilities — the sharp beak served for eating of mollusks, plants, nuts and eggs. The pangolin was the size from a donkey and lived in the territory of the modern China. 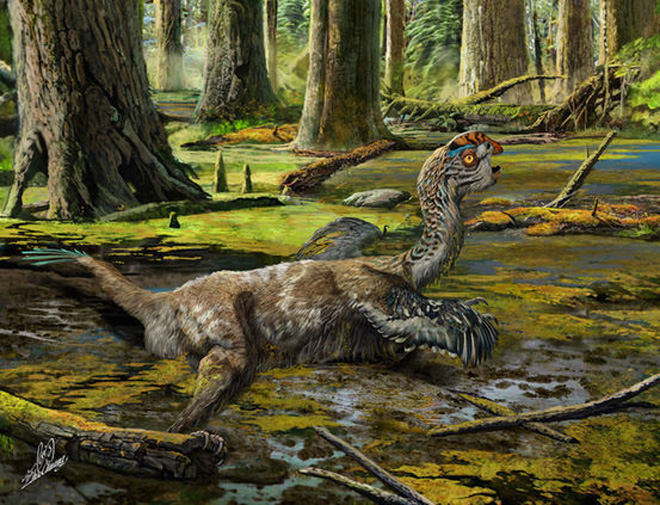 Last year researchers called a new species of a tarantula in honor of the kolubmiysky writer Gabriel Garcia of Márquez, and the patrimonial name of a spider was taken from the local tribe of Indians канкуамо which culture is threatened by destruction. Kankuamo marquezi uses the sharp hairs growing from below a paunch in immediate collision with enemies, in difference of other spiders using them as “throwing weapon”. 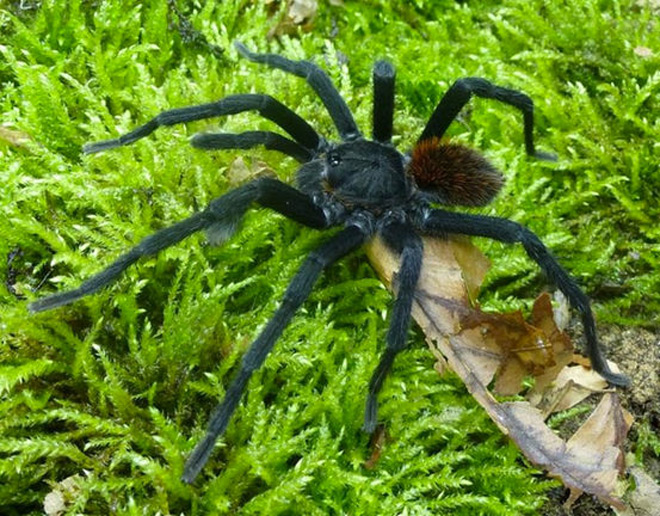 9. New species of a titanosaur

Opening of earlier unknown species of a titanosaur (these huge dinosaurs with the lengthiest neck lived during the Cretaceous about 95 million years ago) helped scientists with a research of a brain of these animals. As a rule, in fossils of titanosaurs there was no skull, however the exemplar found in Patagonia had also a skull and several cervical vertebras. Sarmientosaurus musacchioi possessed extraordinary developed feelings for the small brain, it also had larger eye-sockets that indicates good vision. The anatomy of an inner ear says that he could hear the low-frequency sounds made probably by other titanosaurs. 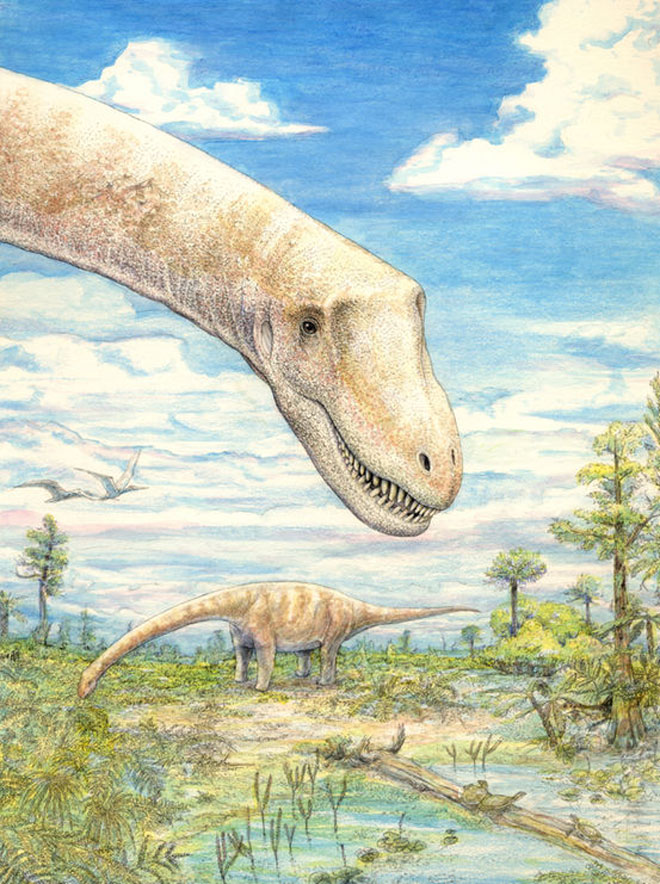 In 2016 researchers opened 2 new species of prehistoric fishes — Rhinconichthys purgatoirensis was open in Colorado, R. uyenoi — in Japan. Their length made 2 m, they lived on the planet 92 million years ago and were planktonoyadny. The sort Rhinconichthys died out about 66 million years ago when falling of an asteroid entailed extinction of dinosaurs. The third type of this sort — R. taylori — was found in England in 2010. Two new look can demonstrate that fishes of this sort lived around the world. 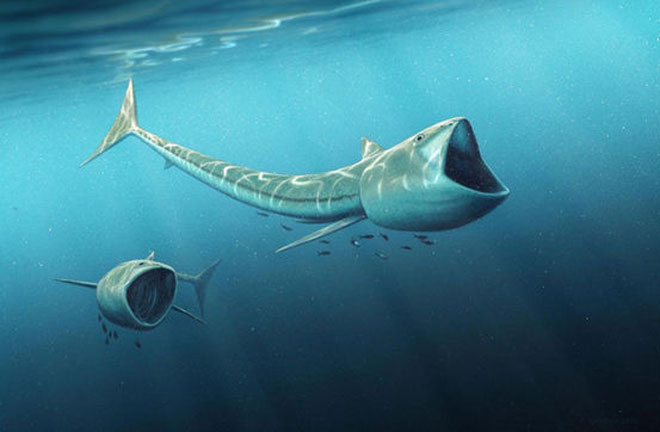