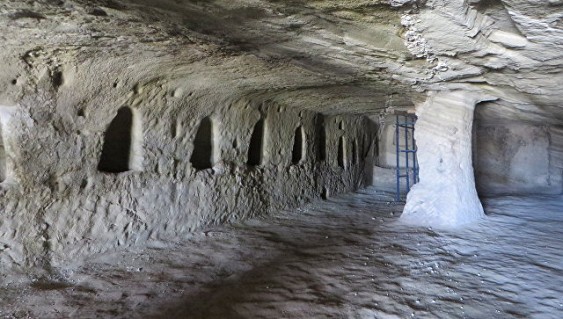 The underground city found in 2014 in Nevshekhire in the central part of Turkey after the end of excavation soon will open for tourists.

In heart of Cappadocia

Nevshekhir, being the capital of the like province where the world famous historical area Cappadocia is located, in itself was never an object of tourist interest. The numerous tourists coming to fantastic Cappadocia usually here do not stop, and go slightly further, to a depth of fancy tuff landscapes – in Goreme, Urgyup or Gyulshekhir.

Tourists can be understood. Nevshekhir, in general, quite traditional modern Turkish city – cozy, green, hilly, quiet, but it is impossible to tell that it abounds with tourist sights.

And still, as in any Turkish city, there are objects, worthy for visit, here. For example, ancient complex of the mosque of Damat Ibrahim and other office constructions. The mosque stands near city administration on a small eminence, and the former madrasah of 1730 of construction performs function of the modern library today. And libraries not religious as it would be possible to expect, and routine, secular character. The library hall quite can pull into place in some rating “10 most picturesque ancient libraries”: it is the real ancient dome hall with painted as in the mosque, a ceiling, gloomy, mysterious, as well as it is necessary to the ancient library respecting itself.

Aged part of Nevshekhir, the region of Plank beds, represents a typical Cappadocian landscape with curve streets and very picturesque stone and clay lodges. There is even the real cave hotel – ancient walls with the modern stuffing, amateur carpets and suppositories and a picturesque panorama of the city.

There are bases to assume that in the near future city authorities should think of reception of a large number of guests because in the center of Nevshekhir the biggest is found in the world the underground city where now excavation is well under way. This city, the name to which not yet, surpasses in the scale of the biggest of the Cappadocian underground cities opened today — Derinkaya.

In the territory of the found city in the 1970th years were so-called to “gedzhekond” — slums where there lived the poorest layers of locals who used ancient rooms, peshcherka, adapting them for housing, even without guessing, what is it.

“It is not absolutely correct to call this city underground because it not so much is in the earth how many creeps on the mountain, having deeply inside only certain rooms, galleries and numerous tunnels” — the head of excavation, the archeologist Ali Aydyn tells.

According to him, now it is opened and about 50 thousand square meters are restored, and everything the area of excavation can reach 300-400 thousand square meters. We rise slightly above ancient library and we appear on a slope of the low, but rather solid mountain speckled on all area by peshcherka, tiny stone rooms as if honeycomb which skimmed.

Here tell oddments of fragile walls from cheap structural partitions which the former inhabitants gave to ancient caves a view of the modern apartments about a recent stormy life. Somewhere else there were broken switches, hooks for clothes torn on wind of the photo of the famous actors from aged magazines …

“In 2012 across all Turkey the City Updating program, the bound to reconstruction or the complete replacement of aged houses which does not have seismic safety started. Within the program in 2014 demolition of aged low-quality buildings of the poorest quarter during which ancient structures were found began. After intervention of scientists and archeologists the place was restoration is preserved and is begun” — the second archeologist Semih Istanbulluoglu conducts an excursion.

“In our team about 100 people work. Working on by the complete opening of the city can last 30-40 years. The first stage is planned to finish in 2-3 years, and then the first part of the city will be open for visitors. One of the most interesting objects of the similar cities – so-called “key stones”: the huge round stone circles having special protection against external enemies and capable to completely block an entrance in rooms very quickly, despite the heaviness. In this city of such stones about 50 are revealed is a record for the Cappadocian cities” — the interlocutor of the agency says.

We come into one of caves and we appear in ancient Christian church which part is filled completely up with the earth and stones. Semih shines with a small lamp on a dark wall – and on it hardly visible friable frescos make the image of the Saints, up to shoulders buried under the ruthless earth.

“People lived here, since the Byzantine times, several churches remained. The most surprising – this odnonefny church of the 13th century, but it remained very badly, so, that we do not touch it so far, we wait for the commission from the Istanbul laboratory of preservation and restoration. In the value it is similar to church Tatlaryn (5th century AD) who is in Gyulshekhir and is famous for the unique frescos. Perhaps, these two churches were done by the same masters” — Semih says.

Very much impresses the underground tunnel – smooth, narrow which length experts estimate at 7 kilometers, but only 700 meters are made presentable now. But it is today, probably, the single object completely ready for tourists, even excellent illumination is carried out.

Not less impression is made also by a huge stable where dredging in walls under the place for food to horses completely remained.

In general, all territory of the “new-aged” city represents a remarkable complex which uniqueness consists, among other things, and in what, unlike other Cappadocian complexes, is in the middle of the big modern city. It can become attractive and convenient for tourists.