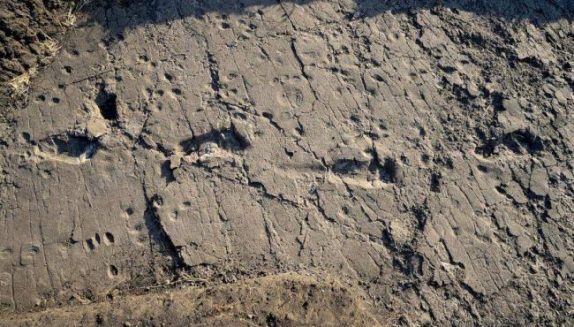 The ancient ancestor of the person was about 165 cm in height, weighed 45 kg and, perhaps, had a harem. Scientists determined all this by marks which it left 3,7 million years ago.

Possibly, it is the highest famous representative of the type of Australopithecuses opened in the seventies thanks to a find of a skeleton of a female individual who got Lucie’s nickname. Its body height made only 105 cm, and weight — 27 kg.

The found 13 prints of legs represent deepenings in a volcanic ash, turned into strong breed which was dug out last year in Northern Tanzania (Africa). Rather big size of traces, on average a little more than 26 cm in length, assumes that they were left a men’s individual of Australopithecus afarensis.

Prints were found in the town under Letoli’s name where earlier found a set of smaller traces of the Afar Australopithecuses who became the direct proof that our ancestors went on two legs. Researchers called a new entity of S1. Having studied traces, they counted that its body height reached 165 cm, and weight — about 45 kg.

As scientists believe, it was at least 20 cm higher, than the individuals who left other marks and on 7 cm surpassed in body height of the previous champion whose traces found in Ethiopia earlier.

Despite calculations, nobody definitely knows a floor or an age of those who went in these places millions years ago. Only by the size of the last traces it is possible to assume that they belong to the man who were probably much more women, than in the modern world. The considerable inequality of floors in the society of A. afarensis suggested scientists an idea that they, as well as gorillas, could differ in the social device with the dominating male and group of females with posterity.

However not all scientists agree with results of a research. “I do not think that the carried-out assessment allows to claim that S1 was above the Ethiopian individual. This opening indicates only a difference in sizes of Australopithecuses” — Filip told Renault, the associate professor of anthropology at University of the State of Pennsylvania who was not sharing in work.