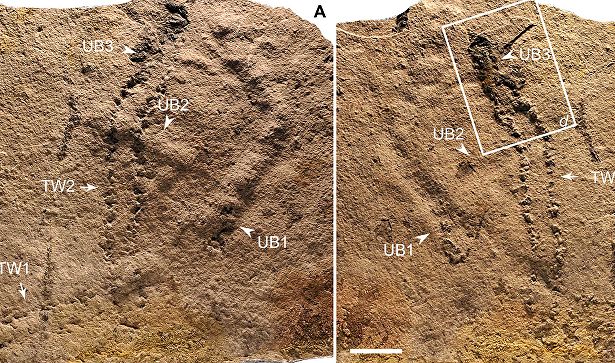 Paleontologists found at the mouth of the Yangtze River unusual fossils of 550 million years old, which retained the most ancient traces of tentacles, legs or other paired extremities of the first multicellular animals of the Earth.

“Genetic studies show that almost all complex animals that have a mouth and nervous system appeared about 700 million years ago, but we actually do not have their fossils, but only their traces on the fossil soil.” At the mouth of the Yangtze River, we managed to find the first traces of animals who had pairs of extremities, “write Zhe Chen and colleagues from the Institute of Geology and Paleontology of the CAS in Nanjing, China.

Today, scientists believe that life could appear on Earth already three billion years ago, but the first 2.5 billion years of its existence, she conducted exclusively in a unicellular form. The first multicellular creatures presumably appeared only 600-650 million years ago, during the Ediacar period, and about their lives, due to the almost complete absence of their remains, we know almost nothing.

This prevents scientists from understanding when the first animals appeared that had paired extremities, intestines, and a developed nervous system – features that almost all modern multicellular living things have, except hydra, jellyfish and sponges. Some paleontologists believe that they originated in the time of Ediacar, while others believe that they appeared much later, in the era of the Cambrian Explosion.

Chen and his colleagues found out that the first theory is closer to the truth by excavating around the mouth of the Yangtze River, where the Dengying formations formed, formed at the bottom of the primary ocean of the Earth about 550-540 million years ago.

On the surface of these calcareous rocks, scientists found extremely unusual structures – peculiar “mink”, tunnels, as well as lines from parallel points and other depressions that connected such depressions.

Analyzing their shape and comparing them with traces of trilobites and other Cambrian animals, scientists concluded that they could find imprints of limbs that resembled the feet of millipedes or velvet worms. They used these legs to walk on the surface of peculiar “blankets” of bacteria that covered the shallows of the seas.

It is not yet clear exactly how these creatures moved – whether they walked on the “outside” side of this blanket, eating what fell on its surface, or crawling along its inner part, eating it from the inside. On the other hand, even now one can say that the first tentacles, paws and other twin limbs appeared on Earth long before the “Cambrian explosion” began.