Transport based on magnetic levitation can build now 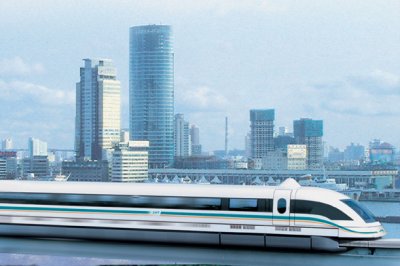 Freight and passenger transport based on magnetic levitation can be used for rapid transit now — Russian scientists have all the necessary designs and even a prototype, said the head of the Scientific-educational center of innovative development of railway transport St. Petersburg state University of Railways Anatoly Zaitsev.

He noted that a prototype is magnetogravitational cargo platform for transportation of large-capacity container. “This platform has a mass of 28 tons was raised, and then moved to the calculated distance using the linear synchronous motor. And for almost half a year the design is in the levitation state, that is, soars to a height of 25 millimeters above the track structure,” — said Zaitsev.

According to him, magnetogravitational transport is an innovative form of transport, which has a high speed, safety, energy efficiency and environmental friendliness. “Using magnetic levitation vehicle hangs above the tracks and moves over them with the traction of a linear electric motor. This allows you to move without noise and vibration, and also saves energy due to the lack of mechanical contact and is not “aging” due to the lack of electrical contact in the system,” — said the scientist.

In his opinion, such transport can be used to port a new type and arrangement of the Northern sea route, in high speed transport for international transit through the territory of Russia in the directions North-South, East-West, as well as in passenger transport.

Zaitsev said that at present already developed the feasibility study of the main part, of great interest to the project show business people.

“We propose to build a stretch of 720 kilometers from the Baltic sea ports to the cargo terminal of Moscow in the framework of a future Federal system magnetocavitation transport corridors North-South and East-West. We have an investor that is ready to attract the necessary funds. According to international estimates, need 22 billion, by our estimates, enough $ 11 billion”, — the story of birds.

“Today we have enough forces — mental, financial, technological. We are able to do it,” he added.