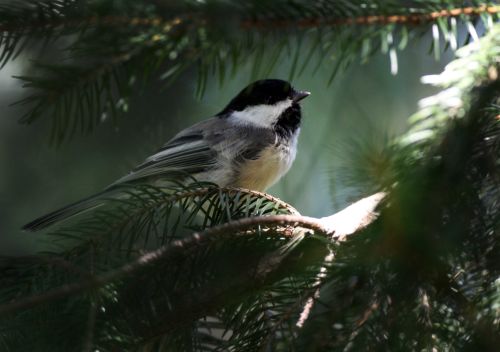 It is known that the ear pollution can break balance in ecosystems. So, operation of sonars is capable to disorient marine mammals, and a sound of gas compressors — to frighten off birds and to influence plants. Most often noise leads to the fact that vocalization of animals changes (for example, its loudness increases). However its connection with reactions to natural signals is studied insufficiently.

To meet a lack, scientists from Vassar’s College made an experiment with two bird species: chernoshapochny gaichka (Poecile atricapillus) and ostrokhokhly titmouse (Baeolophus bicolor). During work authors established loudspeakers near a feeding trough and reproduced three types of sounds: noise of the highway, alarm of the representative of the corresponding look or combination of these sounds.

Scientists watched reaction of birds by means of video cameras and microphones. Results showed that noise of transport can reduce sensitivity of animals to alarms. So, at a combination of sounds of transport and signals of danger of a bird five times more often used a feeding trough despite the warning of a predator. And the noise reproduced separately of birds did not frighten off.

It is remarkable that, unlike birds, bats are probably less subject to influence of an ear pollution. Earlier Dutch scientists found out that wing-handed animals can adapt hunting tactics in the conditions of anthropogenous noise, at the same time its effectiveness remains. In particular, for the best orientation animals modulate intensity of the let-out ultrasound.