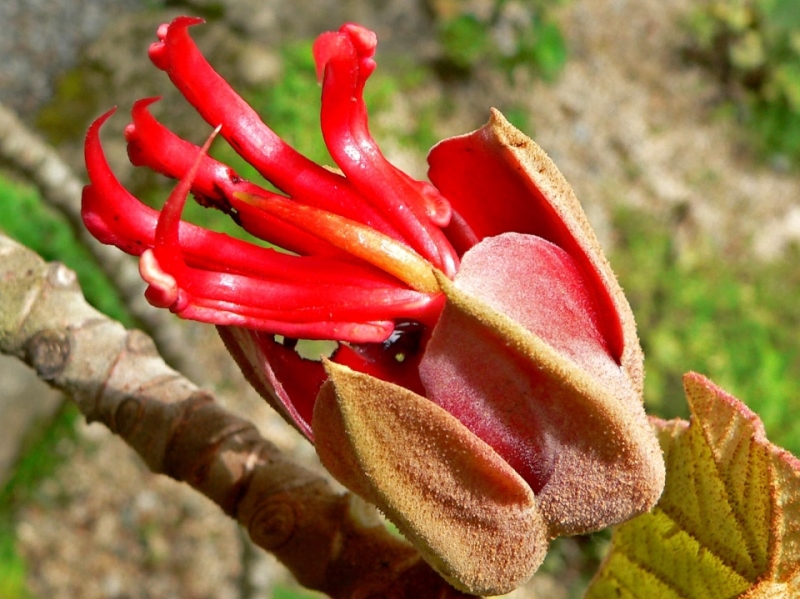 The flowering tree of the chiranthodendron fully justifies its name – “trees with human hands”. His flowers are incredibly like hands: they stretch out of leathery cups like spread out “fingers.” Their blood-red color aggravates the terrible impression. Not surprisingly, the locals refer to a tree with great piety. Earlier, the Indians of the Mexican Highlands performed religious rites and rituals with him.

Hirantodendron pyatipalny – the only representative of the genus, to which it refers. These “hand-woven” trees grow in the mixed moist forests of the mountains of Mexico and Guatemala to an altitude of 2000-3000 m above sea level. The tree is massive: a 30-meter giant in the trunk diameter reaches 2 meters. Its flowers, the size of a good fist, sit in leather cups 8-10 cm across. From such a cup rise “wrists and fingers.” With a certain amount of fantasy, you can even see the “fingernails.” Threatening hands protrude out of the leaves for about two weeks, after which they begin to wither. Blooming trees are abundant, and fallen flowers often carpet the earth as a carpet. The cup accumulates juice, the taste of which resembles fried bread and water.

American botanist Julian Alfred Steyermark (1909 – 1988) described the chiranthodendron as follows: “The similarity with the hand is so great that it can not be overlooked. It goes without saying that this tree inspired fear and reverence. For a long time, the inhabitants of the valley of Mexico City knew only one such tree, which grew in Toluca, – its seeds were planted in the botanical garden of Mexico City even before the conquest of Mexico by the Spaniards. But later it turned out that in the mountains in the south-west this tree grows in large quantities. “Today, because of the original species, it is grown as an ornamental plant.