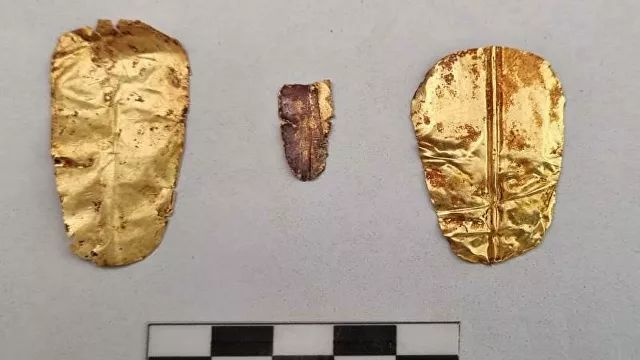 In Cairo, mummies of a man and a woman were found, which instead of tongues – plates of gold foil, according to the Daily Mail.

The bodies were buried in separate tombs in limestone sarcophagi. The burials date back to the Late period in the history of Ancient Egypt (664-332 BC), more precisely, to the times of the XXVI dynasty (685-525 BC).

Archaeologists are not sure who the man and woman were during their lifetime, but their tombs were built next to each other.

The remains of the man are well preserved. His grave was sealed – the robbers did not get to it. Scientists have discovered several artifacts there. Among them are ritual canopic vessels, into which the Egyptians placed organs extracted during mummification. Also found were a scarab amulet and funerary figurines made of faience.

The remains of the woman are worse preserved. Her tomb was opened by robbers.

The golden tongues of the mummies are in good condition.

Archaeologists often make such finds. Gold plates were inserted during the funeral. This was done so that the spirit could speak with Osiris, the king of the underworld, who judges the dead. It was believed that the golden tongue would allow the departed to convince God to show mercy to them.