Tyrannosaurs had lips hiding the teeth 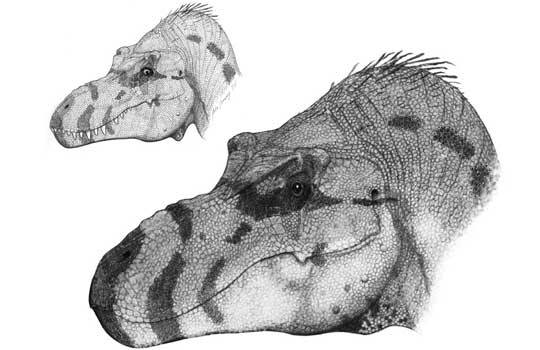 Tyrannosaurs probably had a lip, hiding from others their large and sharp teeth. Canadian paleontologists, and made this bold assumption, does not confuse the complete lack of lips like modern reptiles because the dinosaurs lived in very different conditions, they say.

However, face-lifting t-Rex, most likely, is one of the many quirks of the scientists studying the distant past. In any case, to find like-minded people in the scientific community Canadians have not yet succeeded

The idea is to equip the mouth of a Tyrannosaurus Rex lips belongs to Robert Reis (Robert Reisz of the University of Toronto. Obviously, knowing the extravagance of some of his hypothesis, he did not publish it in scientific journals and presented only at a meeting held in may the annual meeting of the Canadian paleontological society. However, self-righteousness, he does not hold.

“Permanent smile” theropod always bothered me, ” he said. – Although I understand that many will be hard to give up terrible, but the usual “fierce” T. rex with bared teeth.”

Typically, for the reconstruction of the various habits and characteristics of the structure of soft tissues of dinosaurs, scientists resort to analogies with modern relatives of these ancient reptiles – crocodiles and birds. But neither those, nor others soft lips surrounding the mouth, unchecked. However, this doesn’t bother Dr. Reis.

As a key confirmation of his hypothesis, he drew attention to the tooth enamel – the hard coating of the teeth, as found in modern animals and dinosaurs. By its very nature the enamel badly keeps a moisture, and in its absence becomes brittle and easily damaged. In crocodiles, said canadian paleontologist, the drying of the enamel prevents aquatic life, and mammals of the lips and cheeks, holding inside of the mouth saliva.

Because the tyrannosaurs were not permanent residents of the ponds, says Reis further, to maintain the enamel of the teeth in working condition they are vital to the lips. Otherwise, t-Rex will quickly lose its main working tool, turning from the king of the Cretaceous period in a potential corpse. The weak point in this scheme are, for example, some mammals with their ever protruding from his mouth teeth from elephants to saber-toothed tigers.

To help to understand the issue offers Jizza Jack Zeng (Zhijie Jack Tseng) – a renowned expert on the biomechanics of bites from the American Museum of natural history in new York. “The teeth of mammals have a prismatic shape and a grooved structure, and the growth of their enamel is distributed in all directions, creating a spatial structure that is good to hold water,” – said the expert. With regard to the teeth of reptiles, he added, they have enamel only grows in one direction, forming another type of structure that is unable to retain water effectively and making these teeth is potentially more vulnerable to breakages and cracks.

However, for reptiles, this situation is not decisive, says Zeng. This mammal is limited to only two sets of teeth – milk and permanent, as the teeth of reptiles grow all my life, replacing lost as needed. “T. rex can break a tooth or lose stuck in production and pretty easy to replace it. So that special protection of the teeth from drying out is not for them the critical moment”, – said paleontologist.

Will the sharp teeth of a Tyrannosaurus Rex sticking out of his mouth, the same a thing of the past, that the view of dinosaurs as sluggish scaly louts grey-greenish colour? It’s show time and new discoveries, he concluded his speech Robert Reis.