Under the Yellowstone found underground “fountain” of magma 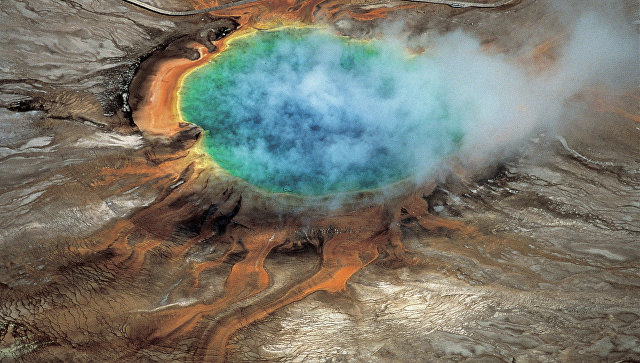 Seismic analysis of the depths of the Yellowstone volcano showed that beneath it lies a powerful plume – a vertical stream of magma rising rapidly from the depths of the Earth’s mantle, according to an article published in the journal Nature Geoscience.

“The history of the birth of this super volcano, located inside the continental plate, has caused heated debate among scientists for a long time, some of the colleagues believe that the reason for its appearance is plum, and their opponents say that it originated as a result of yet unknown processes in the upper layers of the mantle. “We found unequivocal evidence in favor of the first hypothesis,” the authors of the discovery write.

Yellowstone super-volcano today is a giant funnel 72 kilometers long and 55 kilometers wide, which is located on the territory of the homonymous national park in the state of Wyoming. In the middle of the last century, scientists found that this depression is the mouth of an ancient volcano, with a giant magma chamber, located at a depth of about 8 kilometers.

Further observations of Yellowstone have shown that it has erupted over the last million years, and that these eruptions were catastrophic, capable of changing the planet’s climate. On the other hand, scientists could not find the obvious source of his lavas and magma, which makes geologists today fiercely argue about the possible reason for the appearance of a giant volcano in this part of the United States.

Peter Nelson and Stephen Grand, geologists from the University of Texas at Austin (USA), have opened a new chapter in this dispute. They found new evidence that under Yellowstone is a kind of “fountain” of extremely hot and liquid magma, rapidly rising to the surface of the Earth from the deepest layers of its interior located on the boundary between the core and the mantle.

Similar flows of magma, similar in shape to the fungus, scientists call plumes. Plumes, due to the high speed of their movement and high temperature, can sometimes “punch” the thick and cold rocks of the continental crust and come out to the surface of the planet, causing the most powerful volcanic eruptions.

Geologists, as Nelson and Grande tell, have long suspected that there may be a plume beneath Yellowstone, but to date they have not had clear evidence that it exists. This led many “skeptics” to believe that in fact this stream of hot matter was generated by shards of the sea plate, which has long been immersed in North America, but has not yet broken up into pieces.

Texas scientists have proved that this is not so, analyzing how two rare types of seismic waves passed through the Yellowstone National Park and the core of the Earth, using a network of USArray seismographs. A large number of these detectors helped geologists compose a three-dimensional map of the interior in the vicinity of the volcano and understand exactly how the magma rises to its surface.

As shown by these measurements, there is a fairly narrow and direct magmatic “tube” beneath Yellowstone, which extends deep into the Earth for about 2.7-3 thousand kilometers. Its properties and dimensions, as the scientists note, unequivocally say that it was generated by a plume whose temperature was higher than that of the surrounding rocks, by about 600-850 degrees Celsius.

This discovery, as geologists emphasize, does not yet allow us to say when the next eruption of the super volcano will occur and does not make it more likely. On the other hand, further observations of plume behavior, as Grand and Nelson hope, will help scientists to understand in advance that the volcano has begun to wake up.