Underground began the search for a mysterious dark light 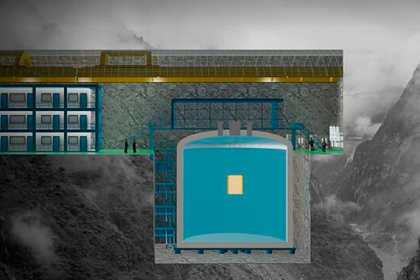 Chinese physicists working in the China Dark Matter Experiment (CDEX) collaboration have begun a search for hypothetical particles called dark photons that are candidates for the role of dark matter. They managed to reveal the possible properties of mysterious particles, which will help them find in the future. An article with the results of scientific work is published in the journal Physical Review Letters.

To search for particles, physicists used an experimental setup in the Jinping Laboratory (CJPL), located underground at a depth of 2.4 thousand meters. It consists of three chains of germanium detectors with three elements surrounded by a cleaned copper shell with a thickness of 20 centimeters, which protects against background radiation. The entire structure is immersed in liquid nitrogen to maintain a low temperature.

If dark photons exist, then one of the ways to detect them is to interact with germanium detectors in a process similar to the photoelectric effect with the participation of ordinary light particles. The source of dark photons can be the Sun, and particles with a low mass of about 100 electron volts constitute the lower limit of the detection limit for the experimental setup.

Researchers analyzed data collected from February 2017 to August 2018. Although no signals indicating the existence of dark photons were detected, scientists have established new restrictions on the properties of light particles of dark matter, including mixing parameters with photons from the Standard Model and how they can interact with ordinary matter.

In the future, scientists plan to improve the experimental setup, which involves the use of a larger cryogenerator with liquid nitrogen with a volume of 1.7 thousand cubic meters and additional germanium detectors weighing up to 100 kilograms.