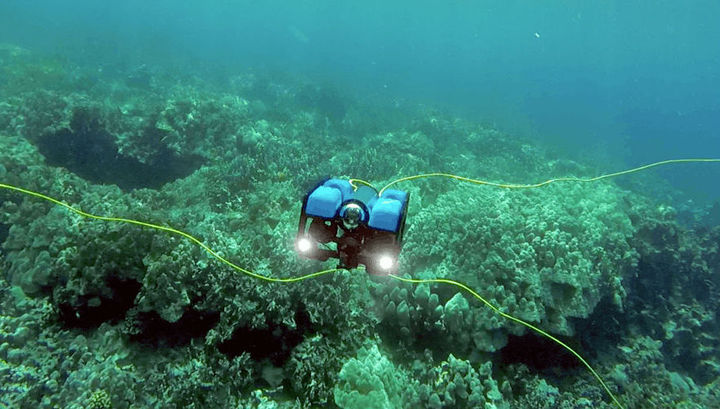 If you’ve ever wanted to feel like a real Explorer of the sea depths like Jacques Cousteau, you will surely enjoy the new development company, Blue Robotics, which offers the first unmanned submarine for a very reasonable price.

Over the last few years flying drones of different designs captured the airspace around the globe. If the first such devices were used as expensive toys, now quadcopters with cameras are widely used for reconnaissance, aerial photography, or obtaining spectacular shots.

Drones on remote control, allowing you to monitor inaccessible areas, widely used in military, rescue workers and scientists. Suffice it to recall the robotic engineers and mobile probes to measure the radiation level on the emergency atomic power stations. Unmanned submarines, invented a long time ago, but still they started from a few tens of thousands of dollars.

The new development, dubbed BlueROV2 is a compact underwater vehicle that can descend to a depth of one hundred meters and maneuver with six screws. The device is associated with located on a surface ship or on shore by the computer, through which control is exercised. Also available is a custom autopilot, with which you will be requested to make a route for the marine drone.

Depending on the selected package on the machine installed the camera filming in SD mode or HD. In order to consider the water depth, the housings are equipped with a powerful led spotlights (but it’s scary). The images transferred to a computer screen with minimal delay to 200 milliseconds.

As reported in the press release of the company’s founder Raised Jehangir (Rustom Jehangir), battery lasts for one hour intensive use underwater drone. But soon the company expects to double the length of his work at least twice. Engineers are also considering the possibility of supplying power from the surface via cable.

New submarine weighs about ten kilograms and 4.5 kilograms falls on a hundred-meter cable.

BlueROV2 already available for pre-order at a price of $3000 for the basic version. The first deliveries of the creators promise to launch in August.