Underwater self-treatment: Dolphins rub against corals to get rid of skin diseases 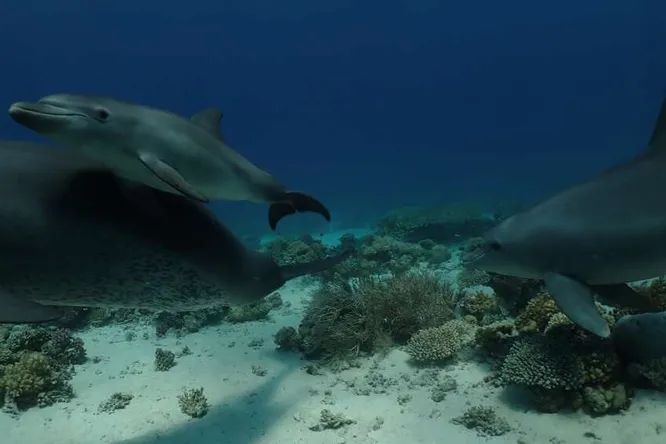 It turns out that dolphins also self-medicate. In the northern Red Sea off the coast of Egypt, scientists recently observed how Indo-Pacific bottlenose dolphins lined up to rub against skin-healing corals.

Researchers have found that these corals actually have healing properties.

In a new study published in the journal iScience, scientists have described how bottlenose dolphins (Tursiops aduncus) in the Red Sea line up nose to tail to rub against corals in an apparent attempt to cure skin problems.

The tendency of dolphins to rub against corals was noticed 13 years ago, but then scientists did not quite understand why the animals do it.

This time, the researchers noticed that the dolphins were choosing specific corals. They realized that the friction irritates the polyps of the invertebrates that live inside it, and that they secrete mucus as a result.

What kind of corals do dolphins choose?
The researchers took samples of the bottlenose dolphins’ coral and analyzed them in the lab. These specimens included Gorgonian (Rumphella aggregata), Sarcophyton (Sarcophyton sp.) and Sponge (Ircinia sp.).

A trio of reef species produced in the laboratory 17 active metabolites with antibacterial, antioxidant, hormonal, and toxic properties.

That is, dolphins used coral as a skin cream/scrub with biologically active compounds.

The researchers plan to continue studying the behavior of dolphins to understand what specific diseases coral rubbing treats and what parts of the body the animals massage more often.