Unexpected North Australia in the photo with the ISS 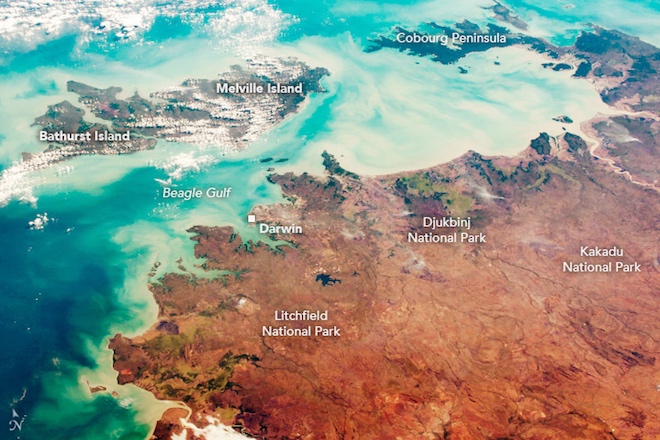 This image of the northernmost part of the Northern Territory of Australia, including the islands of Tivi (the largest Melville, Bathurst and several small islands), was made with the ISS. The area of ​​Melville Island is 5,886 square kilometers, it is the largest island in Northern Australia.

Northern Territory is a subject of Australia. These are sparsely populated lands, in the north – wetlands, in the south – deserts. The rivers flow northward from the heights to a relatively flat coast and carry reddish-brown deposits in the sea, staining its waters. As in other Australian territories, most of the population lives along the coast. Darwin is the capital and largest city with a population of more than 148,000 people.

Although the first settlers of this area were indigenous Australians, many place names occur since the time of research and European colonization since the early 1800s. For example, Beagle Bay is named in honor of the ship on which Charles Darwin made a round-the-world trip. The port of Darwin was also named in honor of the famous biologist, although he never visited these places.

Most of the territory is reserved for national parks or reserves. The Kakadu National Park is Australia’s largest national park. The Dzhukbinj National Park, about 80 kilometers east of Darwin, mainly consists of wetlands. The Lichfield National Park attracts tourists with several waterfalls and huge termites. The Coburg Peninsula (pictured above to the right) separates the Arafura Sea from the Van Dimen Bay and is designated as the Garig Gunak National Park.