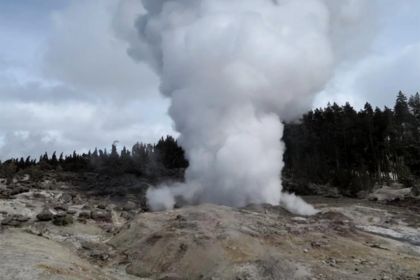 The researchers recorded an unusual activity of the world’s largest geyser Steamboat, which erupted on June 12 and 15, updating the record for the shortest intervals between emissions. This publication reports Live Science.

According to the US Geological Survey, anomalous geyser eruptions indicate the danger of an explosion of the Yellowstone caldera. Steamboat, like many other similar sources, is characterized by unpredictable activity, and the intervals between water emissions can range from a few weeks and months to five years. However, geologists are not aware of the reason why eruptions of the Yellowstone geyser are becoming very frequent or rare.

In 2018, Steamboat set a record for the total number of eruptions, the number of which reached 32. In 2019, there were already 24 emissions. Changes in activity do not pose a threat. A dangerous sign is the drying of geysers due to the rise of magma to the surface, which, however, is not observed.

Yellowstone Supervolcano erupted last two and a half million years ago. A series of eruptions left giant calderas with a diameter of tens of kilometers on the surface, but the repetition of such catastrophic events is unlikely.