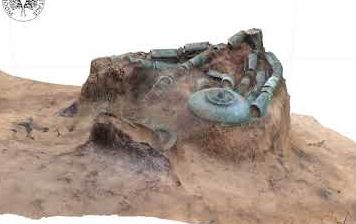 During prospecting works near the town of Torun, Polish archaeologists discovered a leather sack containing more than 150 bronze fragments of a rich horse harness.

According to Nauka w Polsce, the find was made in the area of ​​the village of Cerpice by archaeologists of the Nicolaus Copernicus University. All of the items were neatly wrapped in burdock leaves and folded into a leather bag, the researchers said.

This provided them with good preservation, although the age of these artifacts exceeds 2.5 thousand years. Polish scientists believe that this is the first discovery of this type in Central and Eastern Europe. A metal detector helped to find the harness bag, and the find can rightfully be called a happy one.

Archaeologists have already finished another day of work and were going to leave the surveyed area. Literally in the last minutes, the detector gave an “interesting and deep signal”. The work was immediately resumed.

In total, 156 small and large bronze items were excavated, which were once part of a horse bridle. The harness sack was buried at the top of a sandy hill, near the banks of the Vistula River. It can be assumed that someone who hid these things so valuable at that time wanted to return for them, but could not do it.

“The surviving artifacts indicate that the bridle was very decorative,” says Professor Jacek Gackowski of the Institute of Archeology of the Nicolaus Copernicus University in Toruń. “This is evidenced by the numerous harness elements – metal and wire, tubular and ring parts.”

According to him, the style of the discovered artifacts leaves no doubt that they were left by a nomad who penetrated far to the north. Most likely, this happened in the early Iron Age (VI century BC).

“It should be remembered that the remains of Scythian weapons and ornaments were found in the Kujava region and on the southwestern edge of the Chelmno land,” says Gackowski. horsemen who came from afar. ”

The scientist notes that a man who buried metal objects in the ground may have planned to use them as raw materials for remelting in the future. At that time, the metal was highly prized and expensive. By the way, the total weight of the harness found is about one kilogram.