Unique insects found to be extinct for almost 100 years 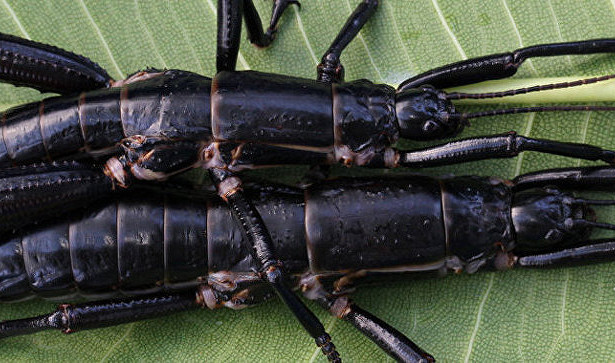 Naturalists and geneticists have discovered on a small volcanic island in the Pacific Ocean a colony of unusual insects, the so-called “wood lobsters”, believed to have died out over 100 years.

“In this case, it seems that we were lucky, and we did not lose this species forever, although this should have happened if there had not been a whole series of happy accidents.We got a second chance to save these rare creatures, which is a rarity in itself” , – said Alexander Mikheev from the Institute of Science and Technology in Okinawa (Japan).

The so-called “wood lobsters”, or stickers from the island of Lord Howe (Dryococelus australis), were considered more than a century, along with dodo from the island of Mauritius and marsupials, one of the first human victims. These unusually large insects, about 15 centimeters long and weighing about 25 grams, lived on the volcanic island of Lord Howe in the Tasman Sea, and prospered until the person arrived there.

Their extinction in 1925 is associated with two things. Initially, sailors and islanders used these unusual sticks as bait for catching large fish, and then the island was “annexed” by rats who survived the shipwreck in 1918, and they quickly destroyed all the remaining Dryococelus australis. Subsequently, rodents who did not have natural enemies on the island, destroyed 11 more unique insect species and five species of birds.

In the mid-1960s, one of the climbers who traveled through the tropical islands of the Pacific opened one of them, named “The Pyramid of Ball”, a colony of insects very similar to “wood lobsters.” Their discovery caused fierce disputes among entomologists – some researchers believed that these creatures are either direct descendants of Dryococelus australis, or even representatives of this species of insects, while others denied this.

Mikheev and his colleagues resolved these disputes, proving that there really is a colony of two dozen extinct stickers on the “Pyramid of Ball”, deciphering their genome and comparing it with DNA samples found in the remains of “real” Dryococelus australis, which were kept in various museums around the world .

According to scientists, the structure of mitochondrial DNA, part of the genome contained in the “power plants” of the cell and transmitted from the mother to her offspring, differed by only 1% in insects from the “Pyramid Ball” and stickers from the island of Lord Howe, that they are the same species.

As scientists hope, this discovery will inspire the inhabitants of the island and will accelerate the fight against rats, which is now being conducted by the island’s government, planning to return the “extinct” sticks after getting rid of rodents.