Unique photo of the two-color lake in Chile from space 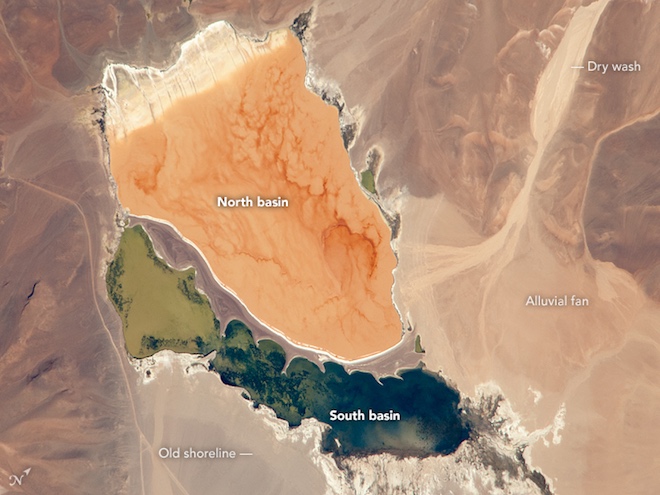 The unique photo of the mountain lake in the Chilean Andes published the other day NASA, having visually shown one of natural miracles of the nature. In the picture made one of terms 23 long-term crews of the ISS on March 18, 2010 Negro Frantsisko’s lagoon located in the territory of the Chilean National park Nevado Tres Kruses is imprinted from space.

On a photo clearly it is visible that the northern and southern basin of the mountain lake are painted in different colors, and divide these contrast parts of a reservoir a narrow sandy strip. The play of color is reached due to different salt content, experts explain.

So, waters of the five-kilometer northern basin are painted in orange color because of shallow water: as a result of evaporation of water a large amount of salt collects that the solelyubivykh of algas provides the fertile environment for manifolding specific. These organisms paint this part of the lake in various colors depending on the current temperature and concentration of salt in water. The pictures made earlier show that orange color is rather unusual to this lake; as a rule, it has a light yellow or greenish shade.

Contrary to it, the southern basin receives more fresh water, it is deeper and is more constant. Marshy species of vegetation are characteristic of this part of a reservoir, and at the expense of rather deep water water is painted in dark green color.

NASA also notes that a majority of year in this mountainous area the strong western winds blow (on the image from the upper left edge down). They exert huge impact on a local relief. In particular, at the expense of such wind rose the arched central sandy coast of the northern basin was created. In the southern basin a wind provides sluggish circulation of water at a depth because of what over time sand is washed away from the coast to the lake, forming short alluvial braids. Similar tongues of sand are typical for shallow lakes. Astronauts often observe them in other southern American lakes.

Meanwhile, aged traces of coastlines in Negro Frantsisko’s lagoon indicate that the water line once in the past was much higher than present. It is apparent that then the dividing tongue of sand was not and the lake represented a uniform big reservoir.