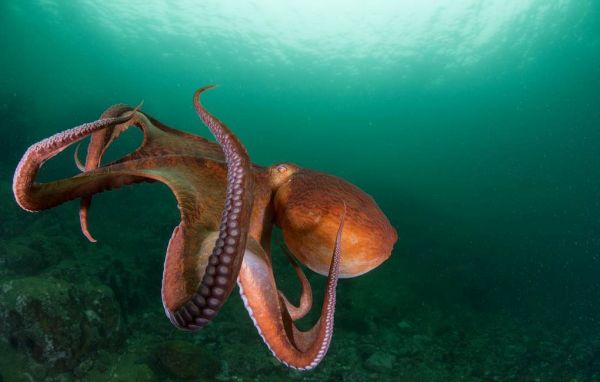 Molecular biologists have discovered that the tentacles of octopuses have taste buds unique to marine animals. They can recognize molecules of various substances that are very poorly soluble in water. This makes octopuses related to land animals, the researchers write in the scientific journal Cell.

“We assume that in this way octopuses can recognize poorly soluble substances on the surface of poisonous animals or inedible objects. For example, if an animal touches a stone or a crab shell, their taste will be different. Thanks to this, the octopus can distinguish them by touch,” said one from the authors of the study, Associate Professor at Harvard University (USA) Nicholas Bellono.

Octopuses are considered one of the most highly developed invertebrates. Over the past half century, biologists have found that these cephalopods can see not only with the eyes, but with the entire skin as a whole, and each of their tentacles has its own “autonomous” nervous system and set of sensory organs.

Bellono and his colleagues have discovered another amazing trait of octopuses. Biologists have studied how the touch of these molluscs works at the level of individual receptors and the entire nervous system of the tentacle as a whole.

The idea for these experiments came from biologists after they noticed that octopuses, which live in aquariums divided into several parts by grates, often felt the floor in fenced areas, sticking tentacles there. If the mollusk touched the crabs crawling on the floor, then it tried to grab them and pull them to itself, while touching the stones did not happen.

This led scientists to believe that octopuses can distinguish crabs from stones, despite the similar size, shape and hardness. Therefore, biologists have studied in detail the structure of nerve cells inside the suckers of octopuses of the species Octopus bimaculoides, and also followed their response to various stimuli.

It turned out that there are three types of receptors in the tentacles of molluscs, each of which responds to different stimuli. One recognized touch and pressure, and the other two recognized substances that are produced by the typical prey of octopuses. After studying the genes that control the production of these receptors, Harvard scientists were surprised to find that one of them was associated with the recognition of hydrophobic substances – that is, those that avoid contact with water.

Scientists were surprised by this, since it is believed that the olfactory and gustatory receptors of marine animals primarily recognize substances that are soluble in water, which in oceans and seas can spread over long distances.

The researchers suggest that the ability to recognize insoluble substances can help octopuses not only distinguish between the “tastes” of inanimate objects and prey, but also avoid contact with poisonous sea creatures or toxic objects.

This is supported, in particular, by the fact that the receptors of the tentacles of Octopus bimaculoides actively react to the molecules of terpenoids – water-insoluble volatile substances that cover the skin of many poisonous polyps, molluscs and other inedible inhabitants of the seabed. When scientists covered part of the bottom of the aquarium with them, octopuses always avoided contact with such areas. That is, the “taste” of terpenoids scared them away.

Scientists hope that further study of the structure of these receptors and the search for their analogs in the organisms of both sea inhabitants and land animals will help to learn the history of the appearance of these nerve cells and understand what role they can play in the life of octopuses, in addition to protecting against potentially poisonous prey.