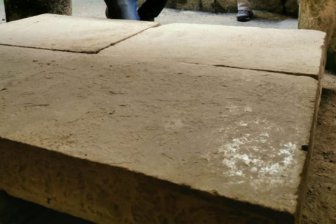 Scientists from the National Institute of Anthropology and History of Mexico discovered an ancient plate with hieroglyphs and drawings when examining a snail temple located on the territory of the Chichen Itza archaeological complex. This place was once the political and cultural center of Mayan civilization, writes The Yucatan Times.

When studying the temple of snails, archaeologists stumbled upon an ancient stone slab covered with hieroglyphs and images. The age of the artifact, as shown by preliminary analysis, is at least a thousand years.

“We stumbled upon a previously unknown stone slab covered with ancient texts. In addition to hieroglyphs, on the slab you can find drawings depicting people tied with ropes. It is assumed that these are prisoners of war who were sacrificed. But the exact meaning of the drawings and hieroglyphs has yet to be deciphered – ahead accordingly, quite a serious job, “says archaeologist Jose Francisco Osorio Leon, one of the leaders of the expedition.

The dimensions of the ancient Mayan plate are 160 by 140 centimeters. In addition to the slab, scientists discovered other stone artifacts made between 900 and 1000 years BC. Archaeologists believe that the slab was not always used as a temple altar – at first it was installed in some other place.