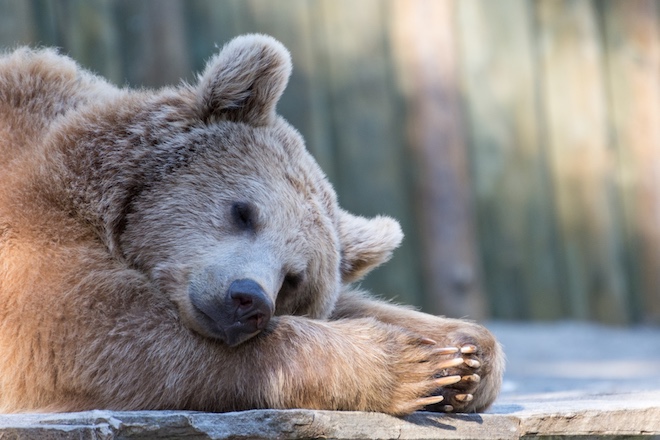 People who are not at all happy about the approaching cold dark pore, probably, are not averse to spring into sleep, as bears or marmots do. But it turns out that in nature everything is not so simple. Here are some hibernation facts that you probably didn’t know.

Everyone has heard of bears sleeping in their den in the winter. But in fact, clubfoot and other wintering species do not sleep at all in the cold season. Hibernation (as scientifically called hibernation) is an extended form of stupor, a condition in which the metabolism is reduced to less than 5% of the norm.

“Most of the physiological functions in this state are extremely slowed or completely stopped,” says Marina Blanco from the Lemur Center in Durham, North Carolina, who studies dwarf Madagascar lemurs (Cheirogaleus spp.), The only primates that hibernate on a regular schedule.

For example, when lemurs are hibernating, their heart rate decreases from 300 beats per minute to 6. And instead of breathing every second, they can spend up to 10 minutes without taking a single breath. Their brain activity becomes imperceptible, which is very different from sleep, when the brain still performs unconscious functions.

Why do animals hibernate?

“Simply put, hibernation is a way to save energy,” explains Kelly Drew, a neuropharmacologist at the University of Alaska at Fairbanks, who studies the chemistry of the brain of hibernating Arctic ground squirrels (lat. Spermophilus parryii).

Although hibernation is most often seen as seasonal behavior, it can be associated with weather events. For example, there are tropical species that may include a “sleep mode” to survive the heat. But temperature is not the only possible factor. Some species hibernate in response to food shortages. For example, an Australian echidna can do this after fires and remain in this state until food resources are restored.

Recent studies have also identified a third cause. This is protection. “When you hibernate, you do not smell, do not make noise, do not make any movements, so it’s very difficult for a predator to find you,” said Thomas Ruf, professor of physiology at the University of Veterinary Medicine in Vienna. His work showed that the mortality of small mammals is five times higher during the active period than during hibernation.

What happens to an animal in hibernation?

To slow down the metabolism, animals cool their bodies by an average of 5–10 ° C, and arctic ground squirrels even below the freezing point. Studies have shown that cooling is probably regulated by adenosine levels in the brain.

However, the species are in a comatose state not the entire period of hibernation. About 80% of their energy is spent on periodic waking and warming. “Why this happens is one of the greatest mysteries of nature,” says Ruf. Some scientists believe that this way they support their immune system to fight disease.

Unfortunately, these revivals in the face of climate change are becoming a threat to the existence of species. Due to the increase in the ambient temperature, the animals during the periods of awakening remain active longer than usual, depleting energy reserves.

One bird and many amphibians, reptiles and insects exhibit conditions like hibernation. There is also one fish that slows down its metabolism in the winter, becoming 20 times less active – this is Antarctic cod.

And, of course, mammals. While bears may be the first to come to mind, they are an exceptional case. Most of the hibernating mammals are much smaller – their average weight is only 70 grams. This is due to the fact that small bodies have a high ratio of surface area to volume, which makes them more susceptible to heat loss. To keep warm in cold weather, they need seasonal energy savings much more than large animals.

Who is hibernating the longest?

An obvious candidate for a prize for the longest hibernation will be a sleepy-half polka (lat. Glis glis). These rodents may remain inactive for more than 11 months. To sustain such a “pause”, they must double or even triple their body weight while active.

Another contender for victory is the big brown bat (Latin Eptesicus fuscus), which, as part of the experiment, “wintered” in the refrigerator for 344 days. True, such a record cost her her life.