Unknown species of extinct animals were discovered due to bones digested by crocodiles.

In the scattered bones that had been in the stomachs of crocodiles, paleontologists recognized the remains of previously unknown mammals that had become extinct when humans entered their habitats. We are talking about minerals collected in caves and peat deposits on the Cayman Islands in the years 1930-1990.

Details are reported in a scientific article published in Bulletin of the American Museum of Natural History by a group led by Samuel Turvey from the Institute of Zoology, London Zoological Society.

Apparently, all three species were unique to the Cayman Islands, which had not been stepped on before the expedition of Columbus.

Interestingly, Francis Drake, who visited the archipelago in 1586, wrote about small animals resembling cats. It could well be C. pilorides lewisi or G. caymanensis.

By dating the fossils using the radiocarbon method, the researchers concluded that with a probability of 95% they all became extinct between 1632 and 1774, that is, after the Cayman Islands were settled by Europeans.

Most likely, colonization and destruction of these mammals. It is unlikely that people deliberately exterminated them, but rats, dogs and cats brought to the islands could assume this role.

“People are almost certainly to blame for the extinction of these newly described mammals, and this is only the tip of the iceberg of mammals extinction in the Caribbean. Almost all of the mammals that lived on these tropical islands, including all local Caribbean sloths and monkeys, have recently disappeared,” says Törway . 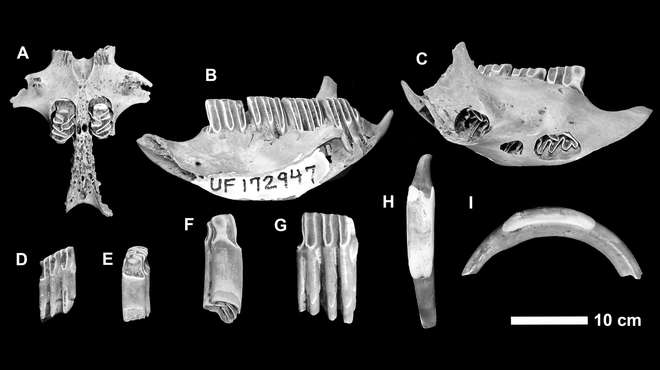 For decades bones lay on the museum shelves before they fell into the hands of researchers.
Illustration of Nancy Albury.

After analyzing the anatomy of animals, as well as mitochondrial DNA, preserved in the bones, the authors came to the conclusion that the ancestors of the whole trinity came from Cuba. In particular, C. pilorides lewisi, as the name implies, is recognized as a subspecies of the Cuban species C. pilorides. The differences between them make up only 0.5% of the mitochondrial genes.

True, it is not entirely clear how the ancestors of these mammals could overcome the 250 kilometers of the open sea separating Cuba and the Cayman Islands. Perhaps they were helped by drifting “rafts” from plants. In some cases, such “boats” can overcome up to one hundred kilometers per week.