Unusual connection between bees and solar eclipses is revealed. 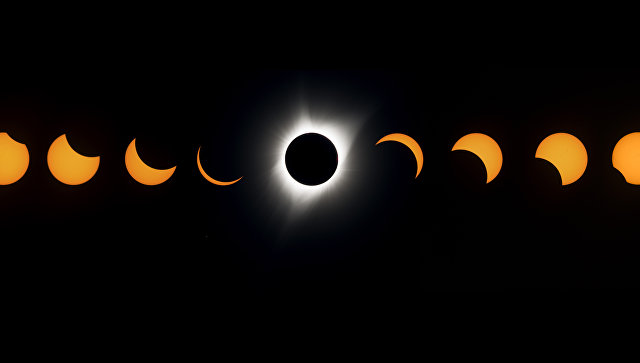 The last total solar eclipse helped biologists to confirm the existence of an extremely unusual phenomenon – bees and other insects abruptly fall silent and stop moving at the moment when total darkness sets in. Their findings were presented in the journal Annals of the Entomological Society of America.

“The mention of this phenomenon in the literature made us expect that the level of activity of the bees will gradually fall. But we absolutely did not expect to see that the bees would fly normally before the onset of a total eclipse, and at that moment abruptly stop moving. It looked like someone suddenly turned off the light in the room, and all life in it subsided, “- said Candace Galen (University of Missouri (USA).

A solar eclipse occurs when our natural satellite, the Moon, passes through the disk of the Sun in its motion. It always happens at the time of a new moon. But not every new moon a solar eclipse occurs. Due to the inclination of the Moon’s orbit to Earth’s orbit, the Moon usually “misses” slightly and travels above or below the Sun. However, approximately 2-5 times a year, the shadow of the moon still falls on the Earth and a local “end of (solar) light” sets in.

Even less often, so-called total solar eclipses occur, when the disk of the moon completely covers the sun from the earth, temporarily returning the night to its surface on the territory of a narrow strip of the planet’s surface along which the moon’s shadow passes. As a rule, such eclipses occur about once every 18 months, and every point on the surface of the Earth witnesses such eclipses about once every half a century.

At the end of August last year, as Galen notes, another full eclipse occurred in the United States, and many of her acquaintances, as well as journalists, were constantly interested in how dogs and other animals would behave during an “unscheduled” nightfall. Such questions interested Galen herself, and she decided to conduct a similar experiment with the participation of bees and other insects, for whose life she observes.

To do this, Galen and her associates gathered a group of four hundred volunteers who agreed to donate the spectacle for the sake of science. During the eclipse, they did not monitor the solar disk, but monitored the activity of the bees, and also recorded the level of “natural noise” using special microphones, simultaneously measuring the air temperature and the surface of the flowers.

Scientists expected that bees, bumblebees and other insects would behave during an eclipse about the same as at nightfall, gradually reducing the level of activity and falling into anabiosis or hibernation.

The reality was completely different. At first, the bees simply did not notice the eclipse, almost without changing their behavior even with a significant decrease in the brightness of daylight. When the shadow of the moon completely closed the place where Galen and her assistants were, the bees abruptly switched to the “night mode” and stopped buzzing or showing any other signs of activity.