Unusual fossil casts doubt on the representation of scientists about evolution

About 250 million years ago life on Earth has experienced serious challenges of climate changes, volcanoes and the increase in Global sea level led to the mass extinction of living beings. But worst of all natural disasters impact on marine life – 96% of all marine species then disappeared from the face of the earth.

For a long time, scientists believed that the first marine reptiles, which appeared after the mass extinction, developed slowly. But the recent discovery of a rather unusual fossil puts this statement into question.

In a study published in the journal science, paleontologists have described a new marine reptile species Sclerocormus parviceps, similar in structure to the ichthyosaur. Similar, but still different from them seriously.

Explain that ichthyosaurs were a huge group of marine reptiles that lived during the early dinosaurs. Most of them were somehow similar to modern dolphins streamlined body, long beak snout and a powerful tail fins. We would add that the ichthyosaurs in the mass, strongly similar to each other.

But recently discovered fossils of S. parviceps clearly differ from their “relatives”. The beings of this species had a short face (in the species name contains the words “small skull”). In addition, instead of a tail with a triangular fin it had a long tail cocoaberry, without the big fin on the end.

There is another significant difference: many ichthyosaurs were conical teeth to catch prey, Sclerocormus was absolutely toothless. How did he earn his livelihood? Scientists assume that probably in the course was his short muzzle: he created the pressure and to absorb food like suck the liquid syringe.

Thus, this type is really different from most of their relatives. It makes the new discovery is very important for the theory of evolution. 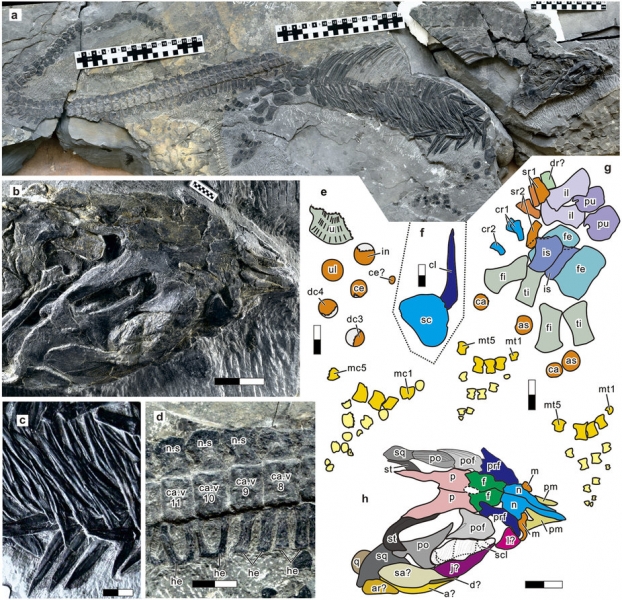 “The discovery of fossils of the genus Sclerocormus tells us that ichthyosauridae creatures evolved and changed quickly in the lower end of the Triassic period. We have so many fossils of the marine reptiles of this period, so this sample is very important because it indicates the variety, which up to the present time, scientists had no idea,” says Olivier Rippel (Olivier Rieppel), employee Fallowsage the natural history Museum.

The way in which this new kind has evolved in such different from the rest of the form, sheds light on how in fact evolution works. “An evolutionary model of Darwin says about small and gradual changes over a long period of time. But it’s not like what we see here now. Ichthyosauridae these beings seem to have evolved very quickly and in short periods of time,” says Rippel.

In addition, according to paleontologists, such as Sclerocormus animals that lived after the mass extinction, and show how life responds to significant changes in the environment.