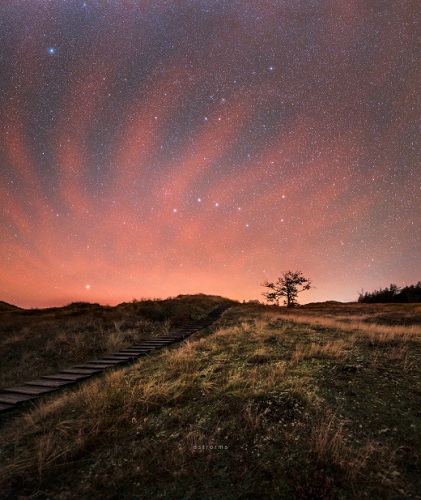 It looks like aurora borealis, but it is not. On October 12, photographer Ruslan Merzlyakov traveled to Tee National Park in northern Denmark to admire the Milky Way. Instead, he saw an epic red glow that permeated the entire sky.

The glow of the air is caused by chemical reactions in the upper atmosphere. These reactions begin during daylight hours, when the atmosphere is flooded with strong solar ultraviolet radiation.

The glow of the air is often accompanied by ripples, such as in the photo of Merzlyakov. These are gravitational waves from powerful thunderstorms that propagate upward and break in the layer of air glow.

Is the appearance of the red glow of the atmosphere related to the flash of red auroras on the same night in Finland? Scientists don’t know for sure.

There is probably no connection. The red glow of air is caused by chemical reactions involving OH molecules in a thin layer of the atmosphere 86-87 km high.

Red auroras are caused by the excitation of oxygen atoms by the solar wind in a wide layer of the atmosphere 150-500 km high.