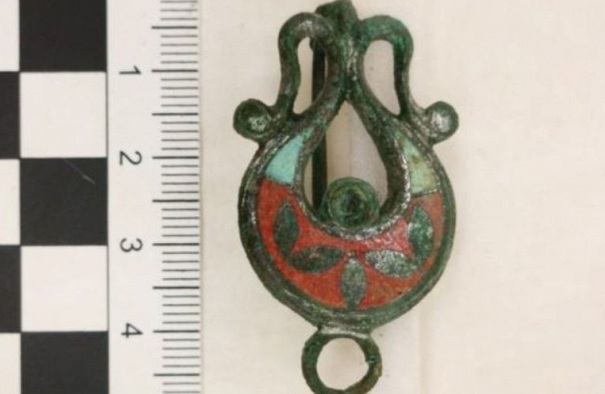 Roman and Anglo-Saxon artifacts were discovered in a burial near Coventry Airport (Warwickshire, England).

At the burial site, archaeologists discovered ceramic pots, jugs and jewelry. Experts believe that the two graves belong to a high-ranking officer and a Roman girl aged 6 to 12 years. The wreckage was found during excavations at the housing construction site in the summer of 2017, but many artifacts were officially dated and verified by experts only now.

Archaeologists of the Warwickshire County Council, who led the excavation, emphasize that this is a very rare find. At the burial site of the Roman girl, jewelry was found, including a decorative brooch, a cicada ring and a hair clip.

According to researchers, objects and images on jewelry suggest a connection with southern Europe. The officer’s burial belongs to the Anglo-Saxon graves. It found the central part of the shield, fragments of a knife blade in a leather case and a hanging bowl made of copper alloy. Scientists say that the wealth of the Anglo-Saxon grave implies a person with a fairly high status, so the deceased could be a high-ranking officer.