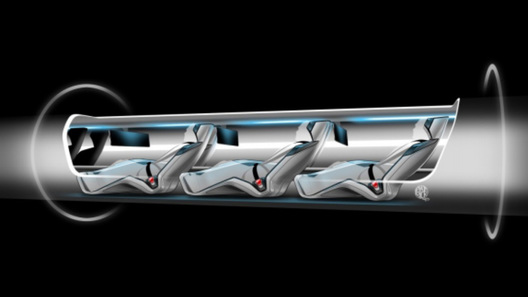 The company Hyperloop One, which took up the implementation of the ambitious idea of ​​the famous Californian businessman, experienced the technology of ultra-high-speed vacuum train on a full-scale layout. In the future, such trains will be able to move at speeds up to 1,200 km / h.

The highest speed of the train Hyperloop provides, first, the lack of air resistance in the tunnel – it moves in a kind of vacuum tube. Secondly, the cars of this train do not touch either the walls of the tunnel or the rails, keeping at a distance from the surface by means of a magnetic field. However, before the full-scale implementation of this project so far.

The Hyperloop One management stated that the first full-scale tests of the technology were conducted. In one of the deserts of the State of Nevada, a section of a vacuum tunnel 500 m long and more than 3 m in diameter was simulated, along which a special platform was launched. She was able to hold on over the coating 5.3 seconds, accelerating during this time to 112 km / h. Acceleration during the acceleration exceeded 2 G.

In addition to the announcement of the tests, the developers published an image of the prototype of the car of the future train called Hyperloop One XP-1. It is planned to be used in further tests of the technology, which developers call “a fundamentally new mode of transport, which appeared for the first time in more than 100 years.”

The progenitor of the idea Ilon Max believes that in the future many megalopolises of the planet can be connected with such vacuum tunnels: the construction of routes for vacuum trains will be cheaper than the laying of modern railways, and they can transport both cargo and passengers. According to some reports, the construction of such a tunnel is being seriously discussed in the Arab Emirates. In addition, according to TASS, as a pilot similar project is jointly considered by the authorities of China and Russia.