View of mantis hunting for fish is open 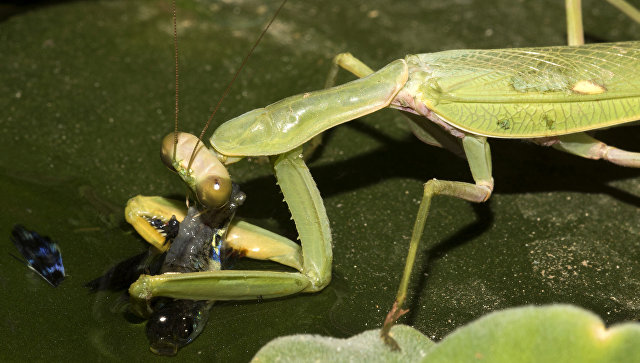 Biologists have discovered in India an extremely unusual population of mantises, which hunt not for other insects, but for much larger prey – fish that swim close to the surface of rivers and lakes. His description was presented in the Journal of Orthoptera Research.

“It seems that mantises can remember where the prey of a certain type occurs, especially one that can be easily caught, that helps them survive and makes them return to” fish places. “Subsequent observations will show whether this is so or not,” notes Roberto Battiston (Roberto Battiston) from the Museum of the Brenta Valley (Italy).

Mantis are one of the largest predatory insects on Earth. They hunt not only invertebrates, but also small lizards, frogs and birds.

These insects are especially interesting in that females can eat their males during mating, storing proteins for their future offspring. Males of many types of mantises have developed complex behavioral strategies that, with varying degrees of success, cause the female to perceive them as a mate, and not food.

Battiston and his colleagues opened a group of praying mantises with an extremely unusual diet, investigating a case that one of the residents of Karnataka in India told them, who built a small garden and a pond on the roof of his house.

An amateur gardener, as scientists say, tried to breed guppy fish and other animals in this pond, which he previously decorated with water lilies and other plants whose leaves were covered with a dense “carpet” of greenery.

After some time, the owner of the pond noticed that in his garden a large mantis (Hierodula tenuidentata), large enough to sit on the leaf surface in a pond, was planted. After its appearance, the number of fish in the pond began to decline rapidly, which, as the gardener discovered, was due to the fact that the insect purposefully fished and ate them.

He informed the authors of the article about this, and they spent the next five days observing the behavior of the invertebrate predator. Scientists initially doubted his claims – the eyes of the praying mantis are not suitable for “water hunting” and they are not familiar with the habits of guppies and other fish.

All this, as it turned out, did not prevent the praying mantis from quietly catching and eating fish. He enjoyed the fact that the surface of the pond was covered with lily leaves, on which it was convenient for him to lie in wait for the guppies, and waited for the curious fish to swim to the surface of the water, confusing the mantis shadow with a mosquito, fly or other insects.

During five days of observation, the mantis managed to eat nine fish at a time, eating two pond inhabitants every night. As Battiston points out, if other tree mantises behave in a similar manner alongside natural water bodies, they can cause serious damage to their ecosystems and seriously affect the viability of fish populations.

In the near future, scientists plan to begin a new series of observations for Hierodula tenuidentata. They, as the naturalists hope, will help to understand whether mantis hunt for fish purposefully, how they manage to catch it and whether they remember such “fish places”.