Visualization of air pollution on Earth in real time 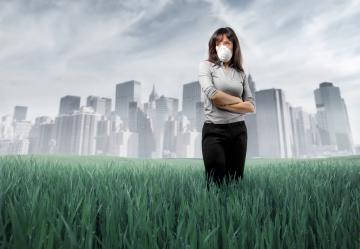 Nine of 10 people on the planet breathe air of poor quality. The environmental problem becomes a cause of death of 7 million people annually. Now you can visually see how the silent and invisible murderer thanks to visualization of pollution of Earth in real time works.

The Airvizhual Ers project shows how health of the planet and our own health is influenced by technogenic emissions of greenhouse gases.

It is the first card in which information on air pollution arrives online on three-dimensional model of the globe. The sphere can be rotated, brought closer and deleted certain sites. The card is constituted with use of registrars of level of impurity of air, satellite data and stations worldwide.

Multi-colored spots on the card are specified concentration of particles of PM2.5 which get into lungs. Red areas — strong air pollution. Green sites — weak.

India and China appear on the card as huge red spots. The most polluted cities of the USA — New York and Washington. The largest cities of Great Britain — London, Birmingham and Manchester — too suffer from low-quality air.

Surprisingly, but, according to the card, intensive pollution is characteristic of the Central and North Africa. Creators “Airvizhual Ert” explain anomaly with huge streams of sand and dust which are brought by wind from the Sahara. Dust and sandstorms deceived satellites which pictures were used for creation of the card.

In the future scientists plan to establish sensors of quality of air in the maximum number of the countries worldwide.