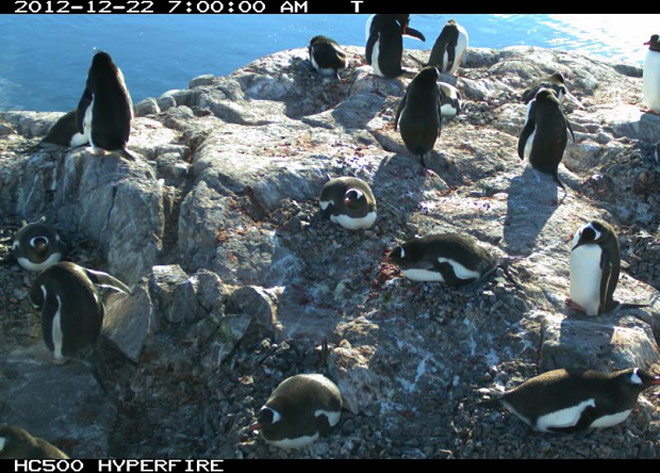 Studies in Antarctica are difficult to conduct due to the remoteness and climatic conditions. The scientists tried to solve the problem in an unusual way – they installed 91 cameras to monitor the penguins in the Falkland Islands, South Georgia, the South Sandwich Islands and Antarctica. Within the framework of this project, named Penguin Watch, several million photographs were received – the cameras take a picture every hour during the daylight hours.

However, such a quantity of data can not be processed by any scientific team, and that is why it was decided to attract volunteers. Thousands of volunteers celebrated in the pictures of adult penguins, their chicks and eggs, in addition, it was possible to mark other animals, people, ships, as well as objects. The system is based on mutual verification – if in one picture a volunteer has discovered a penguin, this picture will automatically be offered for viewing by 10 more volunteers. Thus, more than 6 million images were processed!

Fiona Jones of Oxford University and her colleagues checked 74,000 photos taken by volunteers. In 96% of cases, the absence of penguins in the photo, recorded by volunteers, was confirmed. With regard to the presence of penguins, the accuracy varied depending on whether there were chicks in the picture – they were not so easy to recognize. Small adults can cover penguins with their own body, and grown-ups are difficult to distinguish.

This study will help not only to better study the population of penguins and the impact of climate change on it, but also to create automatic algorithms for determining penguins in photographs.