Vortex paths of the Pocket over Saint Elena’s island 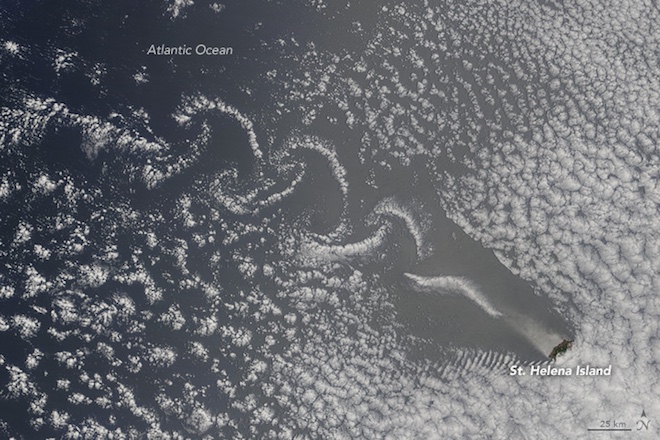 Mountain tops are cut through clouds over Saint Elena’s island, creating vortex paths of the Pocket. Such spiral cloudy educations often meet in the nature, Andrew Akkerman, the researcher from Institute of space researches of NASA of Goddard says. A vortex path of the Pocket — the same phenomenon as strips behind a stone in a stream or ripples in air behind a plane wing.

“There is a lot of turbulence at the edges, but not in the middle” — Akkerman says. The planetary interface — the lowest part of the atmosphere which reaches the Earth’s surface — behaves as water at edges of a pipe which forms ripples.

In the photo above the island Elena’s Saint breaks off clouds, forcing them to gather in folds and to create spiral patterns. The located in the Southern Atlantic, far island is on 1950 km to the West from Africa at the latitude of Namibia and Angola.

His highest point, Diana’s peak, towers on 820 meters above sea level. Spektroradiometr MODIS on the Terra satellite has taken this picture on November 10, 2015.