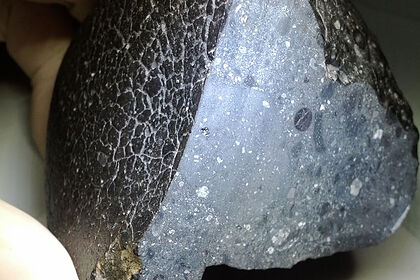 Scientists have found water from Mars in a meteorite that fell in the Sahara Desert. Its age is about 4.4 billion years, according to researchers. The results of the work were published in the journal Science Advances.

The mineral composition of the meteorite NWA 7533, which fell to the ground in 2012, showed signs of oxidation inherent in water. “This oxidation could have happened if water was present on the Martian surface or inside 4.4 billion years ago during an impact that melted part of the planet’s crust,” said study author Professor Takashi Mikuchi of the University of Tokyo.

Previously, scientists assumed that water appeared on the Red Planet 3.7 billion years ago. This happened at least 700 million years earlier, according to new research. As the researchers found, water became a byproduct of some process early in the formation of the planet. If they manage to figure out what this process was, this will affect the theory of the origin of extraterrestrial life.

Two fragments of a meteorite, which disintegrated when it collided with the earth’s atmosphere, was found in the Sahara in 2011 and 2012. Scientists have established that these stones came to Earth from Mars, because they contained samples similar to those collected by earthly robots on Mars.