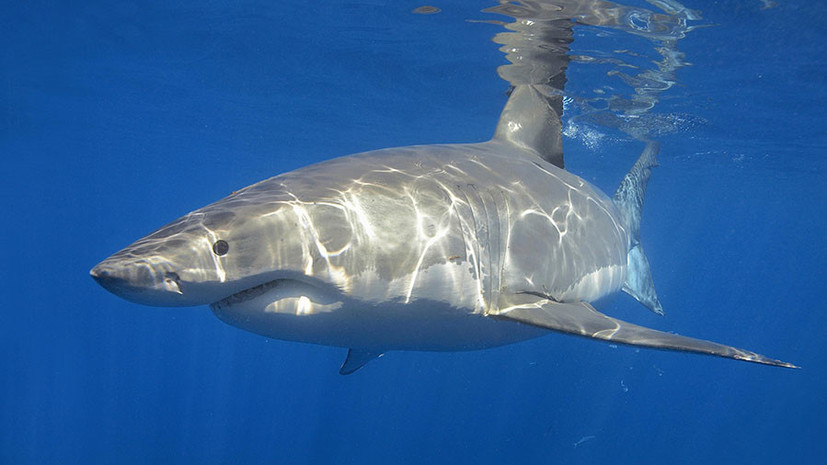 Biologists from Stanford University “looked” in the so-called White Shark Café – a place in the middle of the Pacific Ocean, where annually from December to the end of spring from the California coast and the island of Hawaii, migratory predators massively migrate. The reasons for the trip, which takes about a month, were unclear. It turned out that at this time in the “cafe” there is a lot of phytoplankton, as well as squid, jellyfish and many kinds of fish. Following their potential prey, predators sink to almost the ultimate depth for their kind – up to 1 thousand meters. However, the researchers believe that the behavior of sharks can not be completely explained by their gastronomic predilections.

About ten years ago, scientists noticed that white sharks living near the coast of California, Mexico City and the island of Hawaii, every year from December to the end of spring, migrate massively to the central Pacific part – this place was nicknamed the “White Shark Cafe”. The journey takes a month for the fish. However, his reasons were unclear.

In this region, it was believed that there was very little food for dangerous predators, it was even called a desert for sharks, so researchers could not explain what makes them leave the fish-rich waters of the California or Hawaiian coast. At one time, a hypothesis was put forward that sharks gather in a “cafe” to search for a partner, but it was not confirmed.

Biologists from Stanford University decided to find out the reason for the mysterious migration.

“This is the most ambitious example of vertical migration of animals on Earth, and we were very interested to learn what makes sharks swim so far,” the study’s author Salvador Jorgensen said.

To monitor sharks, Stanford University specialists installed cameras on the dorsal fins of predators. As a result, it turned out that from December to the end of spring there is a lot of phytoplankton in the middle waters, squid, jellyfish and many species of fish that dive deep into the day, and rise closer to the surface at night.

Tracing the movement of sharks in a Pacific “cafe”, scientists noticed that predators live according to the schedule of potential prey: during the day they dive into the so-called middle waters to almost the depths of up to 1000 m for representatives of their species, and at night do not sink below 200 m.

In April, males begin to dive to great depths with increased intensity – up to 140 times a day, while the number of dives of females remains unchanged. The reasons for this difference in behavior can not yet be explained by the researchers.

“The version according to which white sharks visit the” cafe “for the sake of food, seems most reliable. For such a large predatory fish need a good food base, so it is constantly in search of food, “- said in a conversation with RT Deputy Director for Science of the Murmansk Marine Biological Institute of the Kola Science Center of the Russian Academy of Sciences Denis Moiseev.

In summer, white sharks return to the coastal zones. Further study of the changing lifestyle and diet of predators, experts believe, will help develop measures necessary to preserve the species in the wild.