What can make extreme cold with the person? 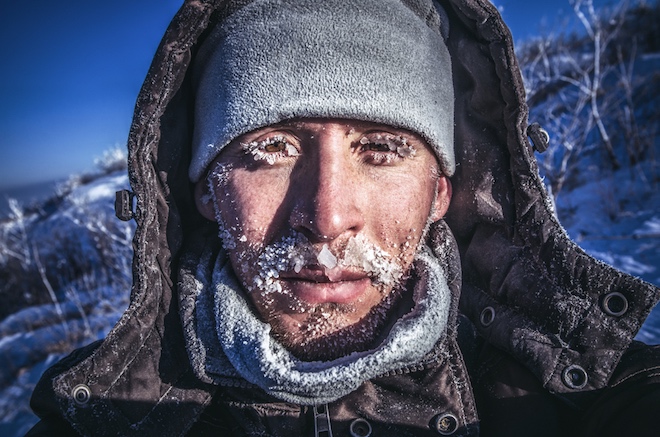 Subzero temperature and wind — rather dangerous combination for a human body. Our organism isn’t calculated on adaptation to extreme cold, and stay in such conditions without protective equipment can lead to really terrible consequences when the word “freeze” gains the most extreme sense. $CUT$

Here the main of them:
1. Freezing of a cornea of an eye

If you not for long are in the open air in cold weather and at the same time run or go, your eyes will water, reducing freezing temperature, and the regular nictitation will support visual organs in working order. But if you love active recreation and play winter sports, spending much time on a frost with the wind in a face — you shouldn’t forget about a goggles.

Experts recommend to warm the frozen eyes a warm arm or by means of a compress, however it won’t help to avoid short-term opacification of vision. Besides, under the influence of wind and cold contact lenses can freeze to an eyeglobe.
​
As a rule, eyes thaw by then when the victim gets to the doctor, and any damage usually begins to live within several days or weeks. But in hard cases there can be a loss of tissues demanding a plastic surgery.
2. Freezing of a skin, muscles and tissues

Unlike eyes, your extremities can freeze completely because of what you can fall or even to lose a leg, an ear or a finger.

The frostbite causes not only a burning sensation or a pricking of a skin, but often affects muscles, tissues and fat under it. The risk is especially high if your clothes don’t correspond to weather. When temperature falls below −40 °C, the skin can freeze within several minutes.

Than more longly you are affected by extreme cold, subjects a high probability of frost penetration in organs to the state demanding ablation. It concerns not only people, but also animals to whom in the winter it is necessary hardly, despite their fluffy coats too.
If the frostbite extends in a body, there is a threat of life.
3. “Shutdown” of a body

The human body is fitted for maintenance of internal temperature on a mark 37 °C. Any deviation causes serious problems and when body temperature begins to fall, there comes the frigorism, or a hypothermia.

Depression of temperature to 32–35 °C starts the process which is followed by a constant shiver, fatigue, hurried breathing and other symptoms. Cooling more than to 32 °C is called a moderate hypothermia. In this case respiration of victims is slowed down because of a hypoventilation of lungs, and their actions remind alcohol intoxication with bad coordination and the muffled speech. The termination of a shiver is an alarming sign.

When body temperature falls below 28 °C, the risk of a lethal outcome increases. Looking at the person in such state, it is possible to think that it is already dead. Approximately on the same mark there is a loss of consciousness, pupils extend, and respiration and pulse become hardly noticeable. The serious stage of a hypothermia demands immediate resuscitation.
4. Confusion of consciousness

Seldom, but happens so that the people dying of a frigorism in the last torments take off from themselves all clothes. There are stories telling about the whole groups which were found dead also absolutely naked on a mountain slope and their clothes accurately lay nearby. Sometimes the police mistakenly takes such pictures for assault.
The hypothermia weakens mental capacities and confuses thoughts. At late stages the blood stream is slowed down and blood vessels extend because of what it seems to victims that they as if are captured by a flame though actually their body promptly loses heat. As a result they throw off clothes and doom themselves to death.

The so-called “behavior of an instillation” can be one more strange reaction to a frigorism. As scientists believe, in a brain of the person under the influence of cold autonomous process, similar to an instinct of animals who before winter dig to themselves holes joins. With the last bit of strength unfortunate try to protect the bodies, having as much as possible buried during snow.
5. Transformation into a mummy

If the person died where the frost is rather strong and hardly someone will find his body, then over time it, most likely, will turn into the frozen mummy.

George Mallory, the researcher of Everest, was missing in 1924. The team found his body only in the 1999th. The most part of his clothes was broken off, but the flesh frozen under it surprisingly well remained. In 2004 tourists on border with Italy and Austria found the remained bodies of three Austro-Hungarian soldiers which were in a glacier since 1918. And it is not a limit. In Italy at the height of 3200 m as a result of a melting of ice the mummy of the person of an era of the Stone Age which received a name of Ettsi was found. Though it is impossible to call a type of this body primitive, without cold conditions from it there is no nothing left, except bones.

That these chilling nightmares weren’t embodied in reality, remember precautionary measures during stay on a frost and doing winter sports, especially in the coldest corners of our planet. Choose the correct clothes, don’t neglect protection and you treat seriously notifications of the authorities about extreme weather conditions.