What do animals see in the mirror? 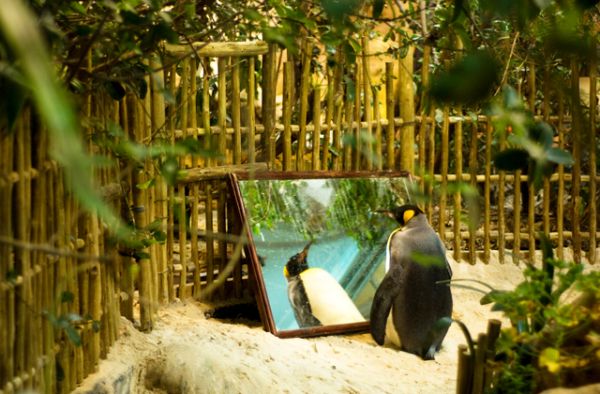 Many pet owners are convinced that their pets recognize themselves in the mirror. Probably, this ability is individual, related to the general level of intelligence, and it can be acquired and developed.

Since animals cannot tell us about their impressions, we have to draw conclusions on their reactions, to experiment. In order to determine whether an animal is able to recognize its own reflection in a mirror, the Gallup test is usually used. An animal under anesthesia is tinted with such parts of the body that it cannot be seen without a mirror. It does not notice it. However, when he faces a mirror, he begins to examine painted spots or tries to remove these spots. In this case, it can be argued that the animal identifies what it sees with itself.

Among mammals, the test was anthropoid apes: chimpanzees, gorillas and orangutans, as well as dolphins and elephants. But even they did not immediately recognize themselves, at first taking their reflection for a fellow. Only gradually, after several days of periodic attempts, did they perceive what they saw precisely as their reflection. By the way, people who have not seen mirrors before behave in exactly the same way.

Among birds, magpies and crows can recognize themselves in the mirror. Moreover, they are able to find food, focusing on how it is reflected. Humanoid apes have a similar ability. They can learn to do hand exercises only by reflection in the mirror.

But most animals do not respond to their reflection or perceive it as another individual of their species, trying to attack or make contact. This, in particular, is the use of mirrors as “toys” for parrots kept alone.

The landscape reflected in the mirror is also initially perceived by the animals as really existing. For example, a bird released in a room may try to “fly” into the mirror. True, usually, having flown close, she turns to the side, as she sees the inevitability of a collision with another bird, “flying out of the mirror.” Very soon, she learns that you can’t get inside, and stops trying. However, this does not prove that the bird understands: the image in the mirror is its reflection. In the same way, winged ones get used to windows. City birds, such as pigeons and sparrows, rarely encounter glass, which cannot be said of the wild.