What happens if you dump a nuclear bomb on Yellowstone 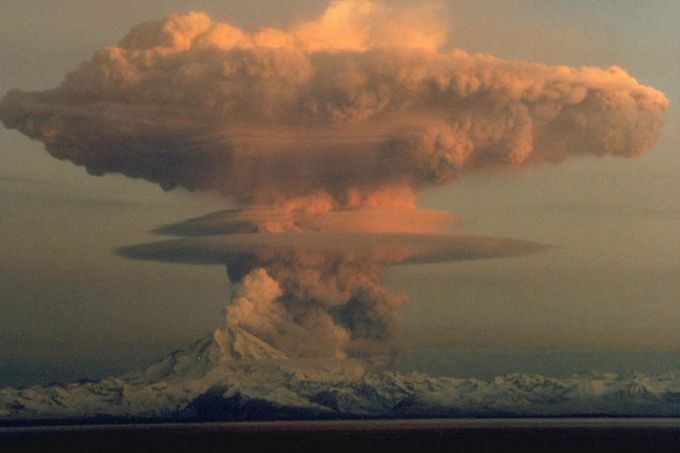 The volcano is a natural element that can destroy entire cities, incinerate forest and agricultural land, to sacrifice hundreds, or even thousands of people. Bomb – the work of human hands, a formidable weapon, created for chaos and destruction. What happens when you combine the two most destructive creation of man and nature? What happens if you reset the volcano bomb?

The bombing of the volcanoes in history

Hardly any sensible volcanologist will come up with the idea to drop a bomb on the volcano activation. However, in the history of known cases of volcanic bombing, the purpose of which was to attempt to divert lava flows from human settlements. In 1992, during the eruption of mount Etna, its lava posed a serious threat to the nearest infrastructure, including astronomical observatories, so scientists have developed a plan for diverting flow, but instead of bombs, decided to use concrete blocks.

The idea of volcanologists was to blow up a magma channel at higher elevations and then into the resulting crater to dump concrete blocks to block the movement of lava. “Bombing” worked with mixed success – it was unclear how the blocks blocked the channel, but the lava was stopped, which had saved the small town of Zafferana Etnea, located on the slopes of the Sicilian giant.

Another example is related to Hawaii. The island has several shield volcanoes, capable of inflicting serious damage to its inhabitants. The greatest threat is posed by Mauna Loa is the world’s largest terrestrial volcano that was quite active in the twentieth century. There was a time when its lava flows could destroy the town of Hilo, to leave the population without water and bring great damage to valuable tropical forests growing on the volcanic slopes.

The idea to bomb Mauna Loa originated in 1881. Over the last hundred years, the United States, at least, twice attempted to divert lava flows with explosions dropping bombs in 1935 and 1942. Both attempts have not yielded encouraging results. Some evidence of the bombing can be found today in the form of small craters preserved in the lava flows.

In the 1970-ies of the U.S. air force in cooperation with scientists of the Hawaiian volcano Observatory conducted a test bombing, which allowed to evaluate the effectiveness of the explosion in the diversion of lava flows. Bombs (relatively modern for the time) was dropped on an old lava field that had no active threads. In the end, experts came to the conclusion that indiscriminate bombing can destroy the top of the lava tube, but has no special effect against the deep magmatic channels.

Testing of the 1970-ies have shown that the erosion of the volcano will lead to the desired result only in the case if you choose the right place. Otherwise it may have unpredictable consequences. According to the scientists involved in the trials, the destruction of a lava tube with proper choice of the goal can be achieved only by one 900-pound bomb.

What happens if you lose at the volcano nuclear bomb

Now let’s fantasize and try to imagine what will happen if you reset the active volcano is not regular, and the nuclear bomb. To start a chain reaction and there was a catastrophic explosion, it needs to be blown up directly over the crater. If to talk about usual stratovolcano (a cone), it is likely that the explosion will be the destruction of its top without invoking volcanic activity. The blast radius of most bombs is small enough to reach the underground reservoir and to release accumulated pressure in it.

The diameter of the fireball of the bomb “Fat man” (Fat Man) that was dropped on the Japanese city of Nagasaki in 1945, was 200 meters. Compare these dimensions, such as mount St. Helens with a height of 2549 meters. “Fat man” had just broken off her top. The Tsar Bomb has a greater structural impact. The size of the fireball reaches 3000 meters, so it could greatly reduce the height of the peaks. If the volcano was preparing to be active, but magma is already close to its ventilation holes, the explosion of the Tsar Bomb could lead to an eruption.

The complete destruction of the giant would have happened only in the case if the bomb somehow magically exploded inside the magma chamber is at a depth of from 1 to 10 km under the ground. The underground reservoir of magma is a viscous liquid, and the flash of the bomb would lead to its melting with subsequent eruption. According to Dr. Robin Andrews, a volcanologist from the University of Otago (New Zealand), this situation could be compared to shaking a bottle of Coca-Cola, but instead of many bubbles in the chamber will be one massive bubble.

Like any volcano, the top begins to spew ash and lava, however in this example the ash would be radioactive. The chain reaction will start to push out into the environment more ash than conventional steam, and the activity of the volcano will continue for a longer period of time, creating long-term risk of exposure to radioactive fallout.

What happens if you dump a nuclear bomb on Yellowstone

What would happen if a nuclear bomb drops on the world’s most famous SUPERVOLCANO Yellowstone? Unlike conventional volcanoes, it has no cone, but it has a huge magma reservoir. Its eruptive power can obscure any artificial explosion. According to Robin Andrews, if nuclear weapons explode at a depth sufficient for opening of the magma chamber, the destructive power of the volcano will dominate the relatively negligible power of the bomb.

The lava emitted during the eruption supervolcanoes probably not traveling outside the Park, and lava flows – not the biggest problem for mankind. A much more serious danger is the ash that spills out for hundreds of miles around, destroy crops, disrupt air traffic and lead to health problems due to lack of oxygen and food. The blast wave would kill and injure people at a distance up to 160 km from the epicenter. In addition, fly ash is radioactive…

The article is prepared on materials of geologist Eric Klemetti (University of Denison, Ohio) and Professor Robin Andrews (University of Otago, New Zealand).