What happens when black holes collide 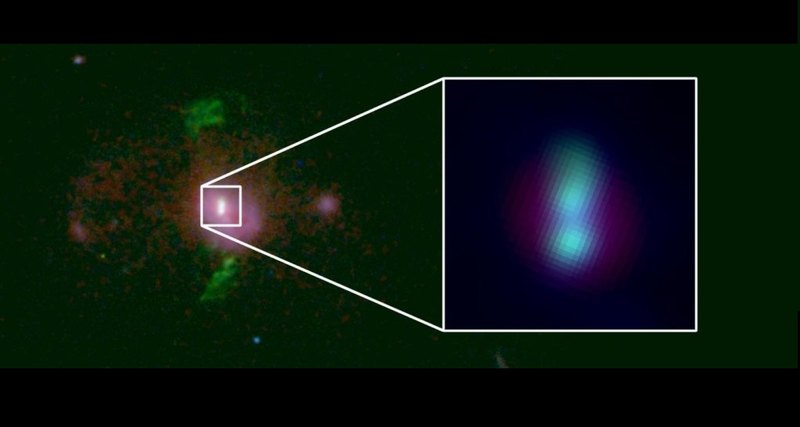 Thanks to the study of gravitational waves, we now understand much better what happens during a colossal event: collisions of black holes. When two supermassive holes come too close to each other, they generate ripples in space-time strong enough for modern devices to detect them right before the collision. But what happens next?

New research can give us the answer to this question. Astronomers have discovered two supermassive black holes that are about to collide in a distant galaxy that is 2.5 billion light-years away from the Milky Way. However, the phrase “is about to collide” is relevant only on the scale of the Universe, since these colossal regions will take about 2.5 billion years (earthly, not light) to finally meet – so it’s unlikely that we will find this delightful sight. However, even now, scientists with great interest observe the convergence of black holes, obtaining unique data about their nature.

Why is this so important? Most likely, by observing them, we can distinguish the so-called “background” of gravitational waves – the hypothetical hum of low-frequency waves from supermassive sources. Now there is no evidence of its existence, since it is outside the range of modern devices. “It’s like a cricket choir at night. You can’t pick out a particular cricket in a general ghoul, but the overall noise level will help you estimate at least an approximate number of crickets – especially if you know how much each individual cricket can chirp on average, ”explains astrophysicist Andy Goulding from Princeton University .

In addition, researchers are concerned about many other issues. What will the galactic core look like after a colossal collision? Will black holes merge into one nightmarish giant whose mass will be 800,000,000,000 times the mass of the Sun? Or maybe both black holes forever stuck in each other’s orbit? If in the darkness of space we can find other pair of black holes that have already collapsed, then we can get the answers to these puzzles in the very near future.