What I want to know, scientists studying Siberian “gate to hell” 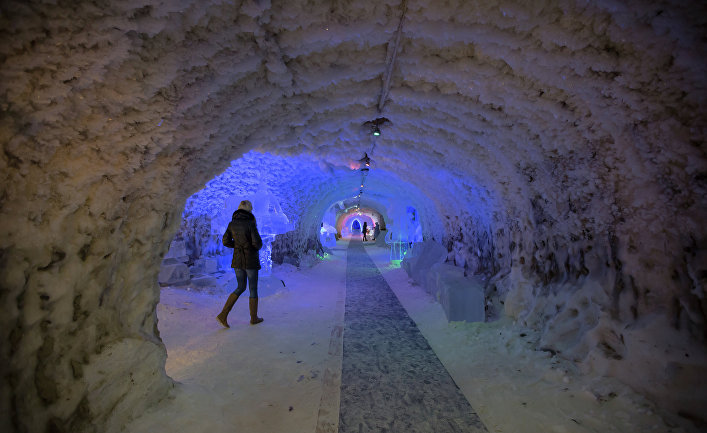 Near the basin of the river Yana, in the midst of vast areas of permafrost is a spectacular failure in the crust, in form resembles a tadpole. This crater Batareika.

It is also known as “megadepression” and is the largest education of this kind: its length is 1 km and the depth is 86 m And the crater continues to grow rapidly.

From local residents he has a bad reputation — they call it a “gate to hell” and prefer not to be here. But for scientists, this place is of great interest.

Exploring the layers of soil that were exposed during the formation of the depression, you can understand how our world looked in the distant past and what was then the climate.

At the same time further the rapid expansion of the crater is clear evidence of the effect climate change has on permafrost.

There are two kinds of permafrost. The first is formed from the buried underground glacial ice after the last ice age.

The second type of ice formed directly in the soil, and in such permafrost is a crater Batareika. Often this ice is under a layer of sedimentary rock, and its age is not less than two years.

Crater Batareika gives us a slice of the underground permafrost, some of which were formed many thousands of years ago.

The first of a chain of events that led to the formation of a crater, occurred in the 1960-ies. Due to the rapid deforestation of the trees ceased to cover the ground during the warmer summer months, the sun’s rays began to gradually heat up.

For the last 200 thousand years, Earth’s climate has varied a few times

All this was compounded by the absence of moisture, which cools the air and soil, evaporating from the leaves of the now extinct trees.

“The combination of these two factors — lack of shade and evaporation, have led to heating of the earth’s surface,” says Julian Marton from the University of Sussex (UK).

This has started to warm and the layer of soil located directly over the permafrost, leading to its melting. From the very beginning of this process, the rate of melting gradually increased.

That is why scientists are watching closely to see what happens to the crater.

In one study published in the journal Quaternary Research in February 2017, said that by analysing the opened layers, it will be possible to obtain information about climate change for over 200 thousand years.

Sedimentary layers in Balagane “represent continuous geological record, and quite unusual,” says Marton. “Reading” this record, scientists can learn how varied and local climate, and the environment.

“We are still working on the timeline,” notes Martone. His next step will be the collection and analysis of sedimentary rocks.

Ideally they should be drilled thoroughly to obtain a “continuous series of sedimentary rocks”, which will allow us to determine a more accurate date.

The data obtained in the analysis of permafrost can be compared with other temperature data, including characteristics of the ice cores taken from ice sheets.

“We want to find out how much the climate was changing [in Siberia] during the last ice age, and how often the warming periods alternated with periods of cooling in comparison with the North Atlantic region,” says Marton.

This is important because the climatic history of a great part of Northern Siberia still little known. Realizing how varied the environment in the past, scientists can predict similar changes in the future.

For example, 125 thousand years ago the Earth experienced an interglacial period, during which the temperature was several degrees higher than now.

“If we can understand what was the ecosystem at that time, we will get at least a rough idea of how the environment may change with global warming,” says Marton.

If the permafrost reacts to heat just as and after the last of the known ice ages, we can expect the appearance of new troughs, pits and large lakes.

We now know that changes in permafrost occur very quickly

In addition, it is possible the appearance of new land now being under the ice at a depth of 10-20 m.

“Permafrost, very rich ice begins to melt from the top down, the ice disappears, and formed an entirely new landscape,” says Marton.

All of this, perhaps, is not far off. We now know that changes in permafrost occur very quickly.

Frank Gunter from the Alfred Wegener Institute in Potsdam (Germany) and his colleagues are watching this place for 10 years, using satellite imagery to determine the rate of change.

For the time of their research, the wall at the top of the crater grew on average by 10 m per year. In warmer years there has been more rapid changes, up to 30 m per year. Gunther told about it at meeting of the American geophysical Union in December 2016.

Constant growth means that the crater every year it becomes deeper

He has reason to believe that in the coming summer months, the side wall of the growing crater reaches the neighboring plains that are prone to erosion. This is likely to be another factor of its further increase.

“Generally speaking, over the years we have seen a sharp increase or decline in these rates, the crater is growing steadily, says Gunter. — A constant growth means that the crater is getting deeper every year”.

It can have other disturbing effects.

Numerous deposits of ice formed during the last ice age are now coming to the surface. This ice contained in the soil, contains large amounts of organic substances, including carbon stored in it a few thousand years.

“The total amount of carbon in the permafrost around the world is comparable to the carbon content in the atmosphere,” says Gunter.

The more permafrost melts, the more of it is released the carbon, which consume bacteria as by-products of producing methane and carbon dioxide.

These greenhouse gases into the atmosphere, increasing the rate of warming.

“We call it positive feedback, says Gunter. — Warming accelerates the warming, and similar processes can occur in other places.”

“It threatens not only the infrastructure. No one can stop it. There are no technical solutions able to interrupt the formation of these craters,” he explains.

There is no indication that erosion of the crater in the near future will slow because of year to year it is growing.

Therefore, the future of the Siberian permafrost — a big question.