What is the temperature on the Sun? 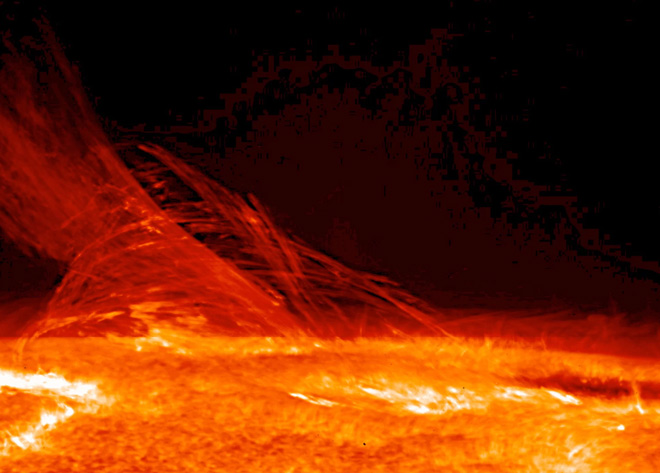 The temperature of our nearest star is not uniform and varies considerably. At the core of the sun, gravitational attraction produces enormous pressure and temperature, which can reach 15 million degrees Celsius. Hydrogen atoms shrink and merge, creating helium. This process is called a thermonuclear reaction.

The thermonuclear reaction produces huge amounts of energy. Energy comes to the surface of the sun, the atmosphere and beyond. From the core, energy moves to the radiation zone, where it spends up to 1 million years, and then moves to the convective zone, the upper layer of the inner part of the Sun. The temperature here falls below 2 million degrees Celsius. Huge bubbles of hot plasma form a “soup” of ionized atoms and move upward toward the photosphere.

“The chromosphere seems red because of the huge amount of hydrogen in it,” the National Solar Observatory wrote on its website.

When the corona cools down, losing heat and radiation, the substance is blown out in the form of a solar wind, which sometimes intersects with the Earth.

The sun is the largest and most massive object in the solar system. It is located in 149.5 million km from the Earth. This distance is called an astronomical unit and is used to measure distances throughout the entire solar system. Sunlight and heat take about 8 minutes to fly to our planet, so there is another way to determine the distance to the sun – 8 light minutes.