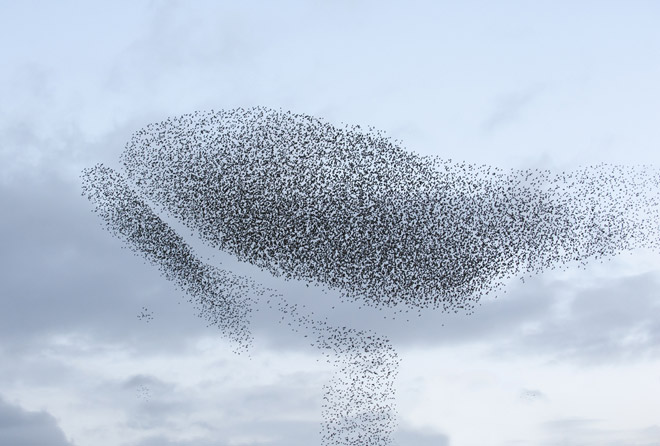 Spring in the British Isles you can see an amazing spectacle of starlings murmuration. Flocks of these songbirds often see on the Aberystwyth-Feast in Wales. Starlings also descend on Brighton Palace and West Pier.

What is a murmuration? It’s a dive down a flock of thousands of birds that form a vortex in the sky above your head. Aerobatics starlings perform in unison, rushing to the ground and “ducking”.

According to the Royal society protection of birds, starlings are grouped together to protect themselves from predators — falcons and other natural predators. The Union group also helps the songstress to share information, for example about the best places for feeding.

Birds perform aerial stunts before arranged for the night to roost. Usually, they choose thickets of reeds or man-made bed.

When there murmuration starlings? Autumn nesting usually begins in November, although it can happen in September. From this moment on, more and more birds begin to join the pack. And in the end the group can be up to 100 thousand birds.

Early evening, before nightfall, is the best time to see birds with your own eyes in the UK. Starlings prefer to gnezdovja in the area, which is sheltered from harsh weather and predators in forests, thickets, on cliffs, buildings and industrial facilities.

How come the starlings? The British population of starlings usually remains in the country for the entire year, but travels around the country. Some pastors, however, migrated from continental Europe and come to Britain from Scandinavia, Belgium, Germany, the Baltic States, the Netherlands, Poland and Russia. Birds arrive to the British Isles in search of mild weather from September to November.

Groups are combined together to paint the sky in brilliant patterns, moving as one unit — and this is one of the great spectacles in nature. And when the starlings arrive in Russia? Very soon we will see wonderful songbirds: if spring will come early — mid March, when spring weather will come late — April. In cities, starlings settle in nest boxes in the forests in the hollows, which for them was prepared by the woodpeckers. Russian starlings also gather in flocks, which can include hundreds and even thousands of individuals. A huge group of black birds do pirouettes, together, turning, ascending and descending. Starlings are guaranteed to leave Russia until September, flying to warmer climes.