What prevents scientists accurately determine the age of the archaeological find 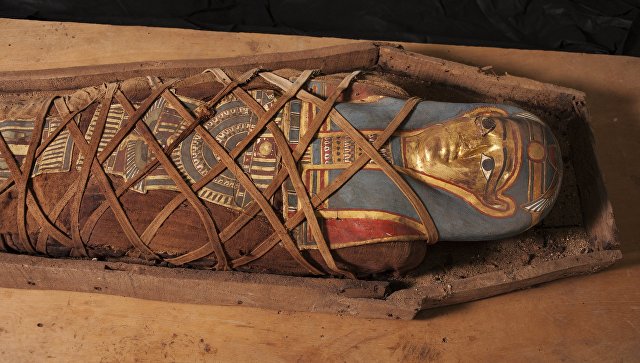 To determine the age of organic remains, including human tissues and bones, archaeologists use the method of radiocarbon analysis. It allows you to very accurately date the find, because it is based on radioactive decay, nevertheless the method sometimes fails.

In the bodies of animals and plants and in general in any biological organics the ratio of radioactive and stable carbon is always constant. This fact was used by the American scientist Willard Frank Libby to develop the method of radiocarbon age determination in the 1950s. In 1960, he received for this Nobel Prize in Chemistry.

On Earth, carbon is represented by three isotopes – a variety of atoms, differing in the number of neutrons. Their ratio in the atmosphere is approximately the following: 12C – 98.93%, 13C – 1.07% and 14C – 10-12%. The first two isotopes are stable, and the third is radioactive, that is, it is inclined to spontaneously change the composition or internal structure by emitting, for example, elementary particles. Isotope 14C is constantly formed in the atmosphere of the Earth at an altitude of 11-50 kilometers as a result of bombardment of nitrogen by neutrons.

Radioactive isotopes are included in the circuit along with stable isotopes of carbon, which means that they enter the living organism with breathing or in the process of photosynthesis. While the animal or plant lives, the ratio of all three isotopes of carbon in it is maintained constant. After the death of the organism, exchange with the external environment ceases. At the same time, the amount of isotope 14C decreases with time in the remains, because it decays. 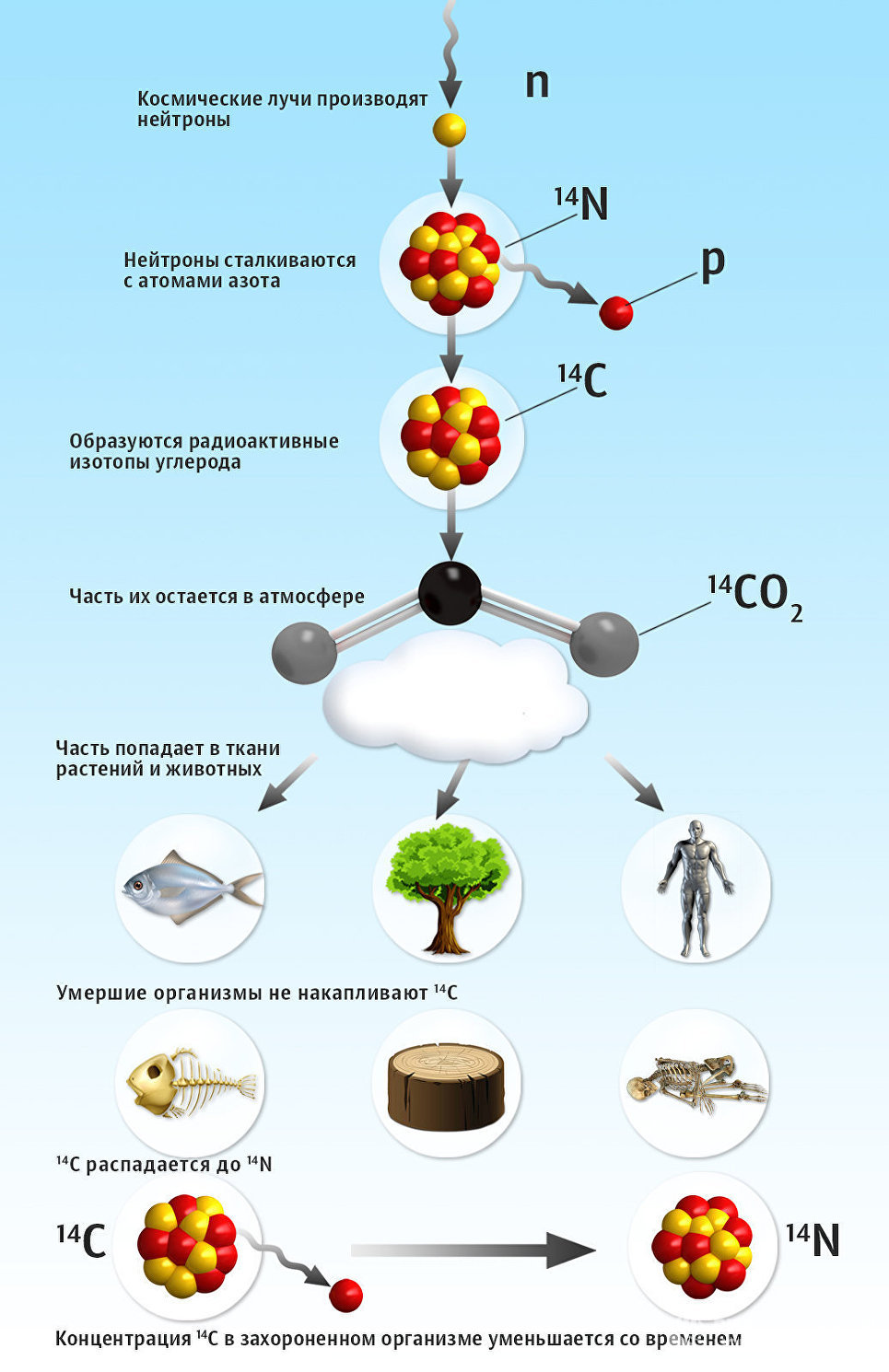 The cycle of radioactive carbon in nature

The radioactive decay of any element occurs at a constant rate. In particular, in 14C the half-life is about 5,730 years. Accordingly, by changing the proportion of the three isotopes of carbon, you can determine how much time has passed since the death of the plant or animal. Considering the exponential decrease in the amount of 14C, the limiting age of the sample, which can be accurately determined by this method, is about 60 thousand years. Through this period of time, all the radioactive carbon disintegrates – and there is nothing more to count. It turns out that radiocarbon analysis is suitable for working with artifacts no older than the era of the Upper Paleolithic. 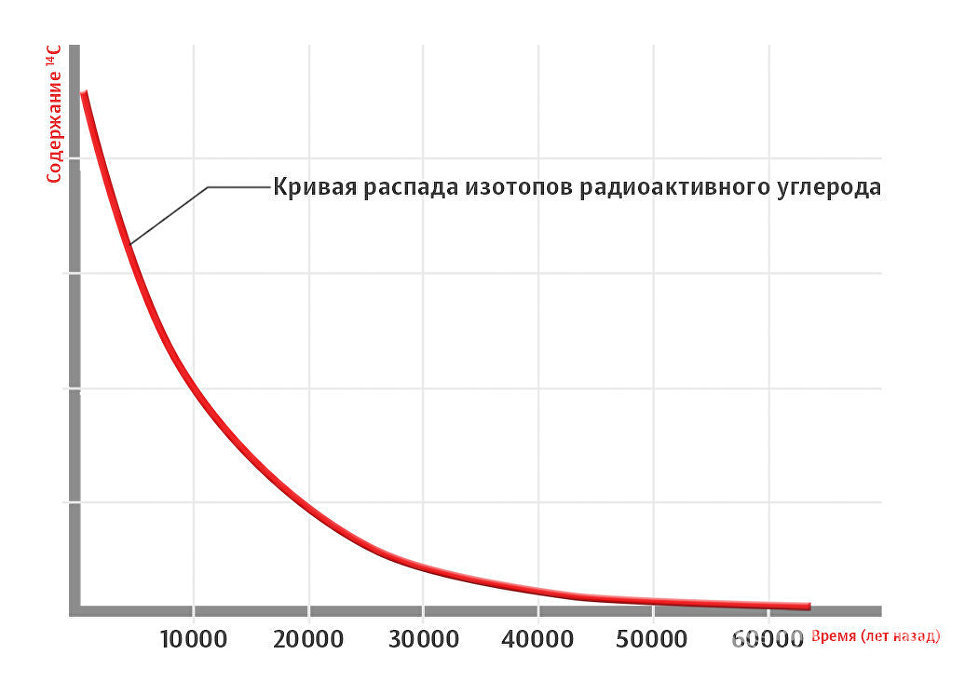 There are a number of problems, because of which radiocarbon analysis gives an incorrect age. First, the proportion of carbon isotopes in the atmosphere has changed because of catastrophic natural phenomena: volcanic eruptions, meteorite and comet falls. It is changing even now under the influence of industrial carbon dioxide emissions. Secondly, 14C can completely penetrate into the dead organism from nearby objects, for example, from the surrounding remains of layers of living plants, air or water, as well as volcanic sediments.

The calculation of the age of trees by the number of annual rings in different regions of the world helped to cope with the first problem. Scientists have studied the sections of awning pines in the south-west of the United States and oaks buried in the river and bog sediments of Europe. Small changes in the graph of fluctuations in the level of radioactive carbon were made by archaeological finds, the age of which was determined from written sources, for example, grains in a tomb with the date of burial. For older samples, the results of measurements of the 14C content in corals, whose age was established by thorium-uranium method, were used. All this, on the whole, allowed calibrating the 14C schedule in the atmosphere in time, and now the data obtained by radiocarbon analysis can easily be corrected simply in a computer program. 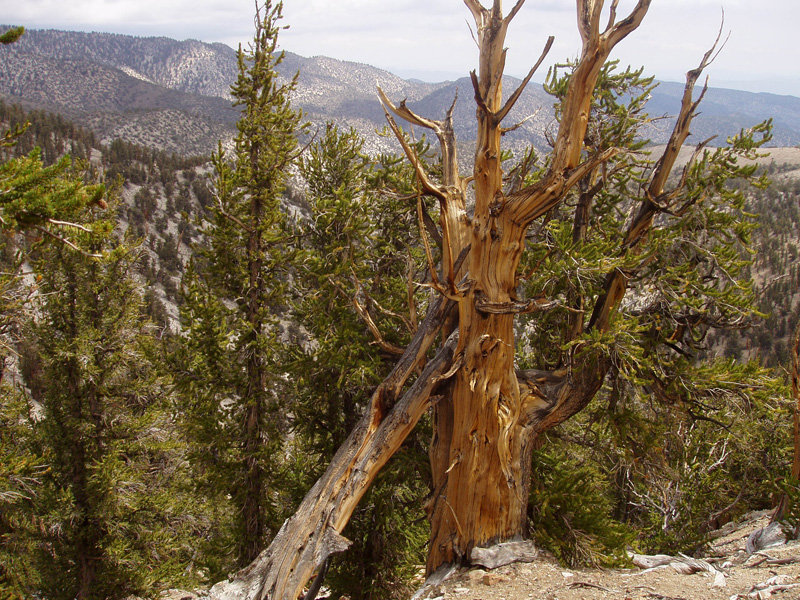 A spruce pine aged 4847 years, defined by the number of tree rings

Errors of analysis associated with an additional amount of 14C, caught in an already dead sample from the outside, to fix is ​​much more difficult. It is impossible to fully calculate the effect of all sources of radioactive isotopes on the object under study, so dating can fluctuate within ± 300 years. In many cases, especially when it comes to the prehistoric period, this is not so critical. It is doubtful when radiocarbon analysis showed quite some incredible age of the archaeological site.