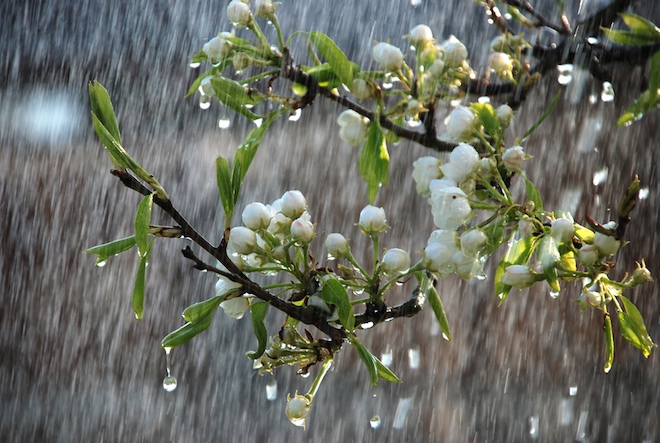 Have you ever wondered what smells like rain? What causes these changes in the smell of the air itself, which you feel before, during and after the rain? According to scientists, these are the smells of ozone, petricor and geosmith.

Before it rains, a person can say that he literally smells the impending storm. Most likely, he feels ozone – naturally present in the atmosphere, a gas that got its name from the Greek word ozein – a smell. Ozone is described as sweet and stinky, this gas descends downward from higher layers of the atmosphere with downward currents during a storm. A pleasant smell that fills the air during a shower, when raindrops come into contact with the ground, is called petricor. The term was coined by Australian scientists Isabel Joy Bear and Richard Thomas in 1964.

Meteorologist Jeff Weber of the Unidata University Corporation project, leading the study of the US atmosphere, explains that the appearance of petricor is caused by oils. Some plants in the dry periods give off oils that are absorbed by soil and rock, and settle in them. During the rain, these oils are released into the atmosphere. Petricor is described as earthy, fresh, musky. As a rule, the smell is stronger after a long period without precipitation, which is associated with the accumulation of oils over time. Researchers believe that oils prevent the germination of seeds, helping to reduce competition from other plants for scarce water supplies.

According to Michel Pettit, a specialist on climate and sustainable development of the Just Energy project, the oils in the soil that cause petricor can also be mixed with living organisms. Bacteria, called actinomycetes, which live in the soil, produce spores just in the drought period. The chemical compound geosmin is a by-product of the metabolism of actinobacteria. When the spores during the rain fall into the air, you can feel its characteristic smell – earthy, associated with the rain. Geosmin smells much stronger during abundant and prolonged downpours. However, according to Pettit, some people can catch the smell of geosmine even when there is a small amount of moisture in the soil.

According to Weber, the bacteria of geosmina contribute to the decomposition of organic materials. Petricor and geosmin arise as a result of interaction with water and subsequent release of aerosol compounds. In 2015, researchers using high-speed cameras observed how raindrops cause the release of clouds of aerosols when they fall to the surface. Scientists at the Massachusetts Institute of Technology believe that these aerosols can carry aromatic elements in vivo, and can be released and distributed during precipitation and wind gusts.