What will be the future of civil aviation 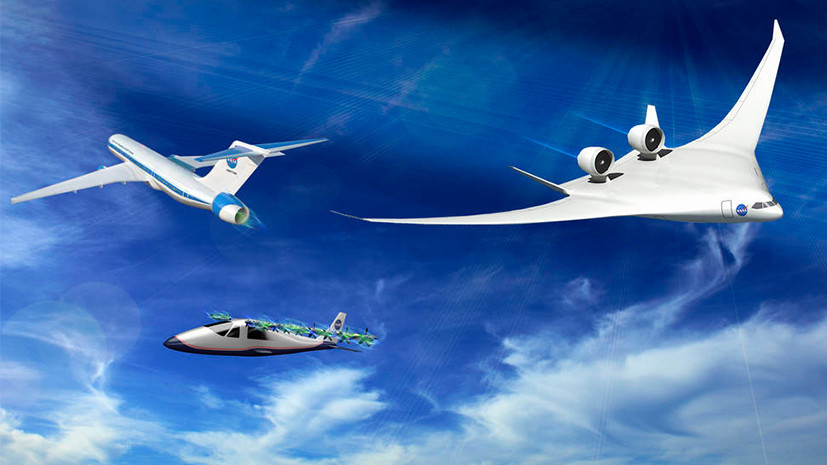 What will passenger airplanes of the near future? Of course, predictions of this kind, look for two or three decades, are rarely precise enough to recall the predictions of the futurists of the 1990s. But in the case of the airline industry, where the development of new models usually takes just a couple of decades, experts may well be prophetic.

Ships of the future must become less hazardous to the environment by reducing fuel consumption. Since the advent of the first jet passenger aircraft (Tu-104, the De Havilland Comet and Boeing 707) in the early 1950s, their efficiency grew at a rate of 1-2% per year. However, the specifics of the industry brings about changes in trend — for example, reduction of the fuel consumption happens in leaps and bounds, from generation to generation of aircraft. So, Airbus A320neo 2016 burns 15% less than the original Airbus A320, operation of which began in 1988. By 2020 it is planned to reach a 20% decline. These rates (15-20% at each generation ships — that is 20-30 years) is not enough to achieve the EU for the year 2050 75%, compared to 2000, reducing emissions into the atmosphere.

Studies by NASA show that a lot can be achieved by improving the aerodynamics of the aircraft — even while maintaining the usual scheme of “wing-fuselage”. Most likely, exotic and still experimental type design “flying wing” or design with recessed engines in the 2030s and will not receive wide distribution. However, it is likely, according to experts, the use of aircraft up to 100 passengers electric hybrid powerplants. In addition, in the foreseeable future aviation will need to switch from refined petroleum products on synthetic kerosene.

As is known to any city dweller, airport — noisy neighbor. During the period when actively growing, air taxis, helicopters widely used and perhaps the return of supersonic passenger aircraft, the noise problem is in danger of becoming one of the main civil aviation. As experts point out, the installation of engines in nacelles nacrylic and inside the fuselage may allow to reduce the noise by 30-40 decibels. Using the same experimental layout of the type “flying wing” would reduce already by 40-50 decibels.

A separate problem is the noise reduction of helicopters, aircraft with vertical takeoff and landing and unmanned aerial vehicles (UAVs). The developed techniques are already, according to estimates by NASA, will reduce the noise level of helicopters by 10% by 2020.

Most of the aerospace industry insiders believe that the return of supersonic passenger aviation is inevitable, the only question is when it will happen. One of the main problems, in addition to security and high operating costs lies in reducing the force of the sonic boom that occurs when breaking the plane of the sound barrier. NASA in conjunction with Boeing and Lockheed Martin plans in 2019 to demonstrate the prototype aircraft, which, thanks to the improved aerodynamics that will reduce the sonic boom to the level of soft cotton. If the experiment proves successful, the ICAO (international civil aviation organization) and the Federal office of civil aviation USA in the early 2020s to support proposals for the removal of the existing ban on the flights of supersonic aircraft over the continental territory (the famous “Concord” overcame the speed of sound only over the ocean). Quiet Supersonic experimental X-plane will simulate the behavior of 80-100-seat liner is able to fly at a speed of 1.6-1.8 times the speed of sound. This is less than the speed of Concorde or Tu-144, but the power of sonic boom will be reduced by one third. The same amount will be reduced thanks to advanced aerodynamics and propulsion — and fuel consumption.

Future large supersonic passenger aircraft yet, however, remains rather vague. But some manufacturers of business aviation expect in case of cancellation of the ban on flights over land, to bring to market a supersonic business jet in the early-2020s. thus, the American company Aerion plans to market its three-engine 8-12-local AS2 already in 2023. Price is able to reach speeds of 1.5 M (i.e. one and a half times the speed of sound) aircraft, however, will also be exorbitant — about $120 million.

Development of a new generation of technology in the aerospace industry — it is long and extremely costly. The development of such novelties as the Boeing 787 civilian and military Lockheed Martin F-35 cost significantly more than planned. Therefore, one can hardly expect a new generation of Airliners until 2030, most likely, the industry will modify already developed and tested model (the example mentioned above, the Airbus A320neo). This also applies to the introduction of new technologies: although 3D itself greatly reduces the cost of construction items, the associated costs to verify the reliability can be extremely high. Therefore, the use of “future technologies” yet, likely to be fairly limited. However, the cheaper research and development (R & d) is greatly aided by computer modeling techniques and the introduction of automated design systems.