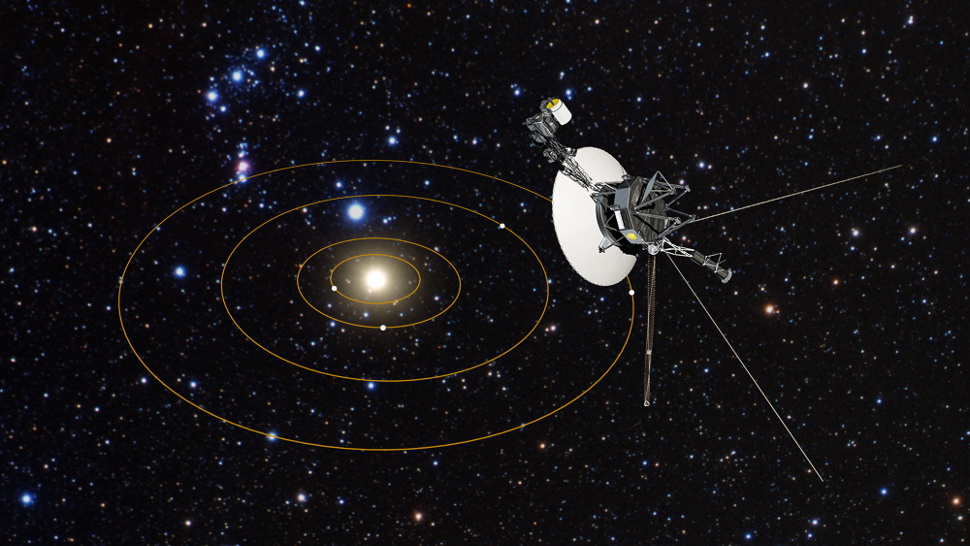 Launched in 1997, the space probe “Voyager” to date got there, where never got none of the assembled human spacecraft. Using the space telescope “Hubble” astronomers have set up a makeshift road map “Voyagers”, which is very interesting and tells in detail about the machines on their way through interstellar space.

As it surprisingly sounds, but the “Voyager” continues to collect and, more importantly, convey to Earth new information about their discoveries. Energy for the work they have left in total for a couple of decades, after which they finally “shut up”. While scientists can examine the new data from probes and compare them with data obtained with a telescope “Hubble”. Moreover, it is likely that astronomers will continue to observe the areas of space, where there will be probes and after failure.

Astronomers from Wesleyan University (USA) recently conducted by the space telescope “Hubble” observations of the areas of space through which the “the Voyagers” will have to undergo in subsequent years. This vast region, called the interstellar medium, contains the remains of ancient supernova, so scientists are trying to learn about it.

The latest information on this subject was presented at the end of last week astronomer Seth Redfield in the framework of winter meetings of the American astronomical community. The data indicate the presence of a rich and complex “deep ecology”, which includes numerous clouds of hydrogen and other chemical elements. Interstellar space, as shown by the observations of Hubble and the data from the “Voyager” is not just empty space.

“Even rushing at the speed of 61,000 kilometers per hour, “the Voyagers” have time to note the presence of these “small Islands of gas.” However, we cannot say whether these features are typical or, on the contrary, rare. Observations using the Hubble give us a broader view of things, as the telescope is able to concentrate for long periods of time in one direction and has a wider field of vision. In other words, “Hubble” allows you to look ahead and to know what each device in the future,” said Redfield.

As mentioned above, both devices were launched into space in one year, but at the moment, each of them has its own and unique space adventure. “Voyager-1 and Voyager-2” are located at the distance of 20.9 and 16.9 billion kilometers from Earth, respectively. In 2012, the device “Voyager-1” has reached the outer boundaries of the solar heliosphere (the heliopause), becoming the first human spacecraft entered interstellar space. “Voyager-2” a little behind his twin brother and only now reached the outer limits of the heliosphere. In the next decade, both tubes, unless, of course, will remain in working condition, will conduct measurements and observations of interstellar matter, magnetic fields and cosmic radiation. A team of Redfield has created two clear the path of the spacecraft and found something that will have to face the “Voyager” and where they will eventually get there. 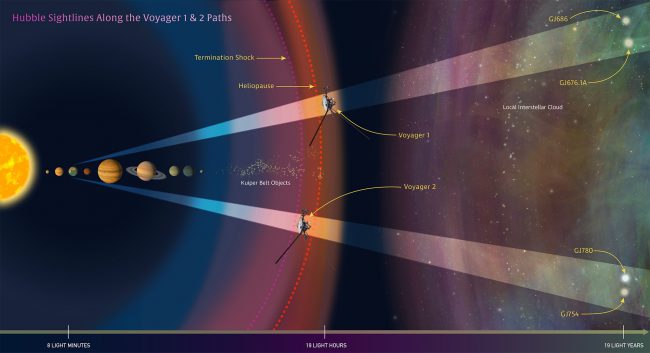 The path of “Voyagers” through the Solar system

Through 40,000 years, “Voyager-1” will pass within 1.6 light years of the red dwarf Gliese 445. “Voyager-2” at this point will be at a distance of 1.7 light years away from a single star in the constellation of Andromeda, a dim red dwarf Ross 248. Astronomers have now found that the probes will be able to overcome the first of the interstellar cloud surrounding our Solar system, then to get to the second pass through which will require 90,000 years, and then to the third. Each of these clouds has a different chemical signatures that may indicate the likelihood of different modes of formation.

After that, the fate of the “Voyagers” is only subject of conjecture. Over hundreds of thousands or even millions of years, the probes can enter the space of any stellar system and become sealed inside by the forces of its gravity. And maybe, as in one episode of the iconic franchise “Star trek”, one of them will be caught extraterrestrial intelligence, upgraded and sent back to its Creator. Then we will just have to hope that “happy ends” are in such cases not only in the movies.